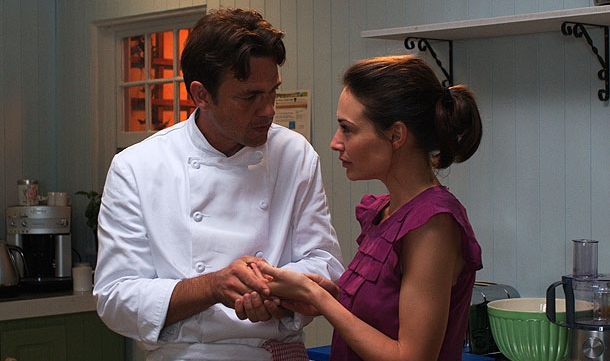 When top chef Rob’s (Dougray Scott) wife dies in a car crash, his cooking goes to pot and his restaurant goes down the pan.
After a particularly bad review appears in a newspaper, Rob’s mate Gordon Ramsay (yes, THE Gordon Ramsay) pays him a visit and suggests he goes through with his late wife’s dream of buying a country pub called The Boot and turning it into a fine gastro-pub.
Local landowner Max (Peter Bowles) doesn’t want the peace and quiet of his village to be disrupted by hoards of foodies flocking to new restaurant, so he does all he can to get him closed down.
But he has a fight on his hands, because his own daughter, American food critic Kate (Claire Forlani), has taken a shine to Rob – and his trifle – and she does all she can to keep him in business.

From the moment the film’s title appears on screen without an apostrophe, it’s clear that Love’s Kitchen (or the meaningless Loves Kitchen) is going to fall short of the standards we’d expect for the big screen.
Actually, the pre-title sequence already has some of the clichés (a close-up of vegetables being diced, the lead character lovingly preparing his famous trifle) and signposts (I wonder why we suddenly get a close up of a manure lorry reversing into a main road, while we’re watching a key character driving very quickly while using her mobile phone) that are to litter the film ahead.
Other cinematic crimes include exposition (“Are you still looking at those photos?” Rob asks his daughter, so that we know some time has past since she lost her mother), incoherence (they open the new restaurant with no publicity and are surprised that they have no customers), inconsistence, (a big deal is made of the fact that Rob is overtaken by a fast driver, yet he reaches their shared destination long before the other driver), corny editing (time lapse sequences to signal that after it’s been daytime for a while, it becomes night-time), clunky editing (lightening fast flashes of other scenes), cinematic shorthand (taking his wife’s ashes to the new restaurant and then scattering them when he’s ready to move on), cinematic coincidence (a TV food critic arrives to do a piece about the restaurant at the exact same time he has to be at a council meeting to fight to keep it open), factual errors (Health and Safety don’t deal with vermin, Environmental Health) – there are several examples of each – and those are before we even consider the dialogue.
“I may be a dumb American, but I’m not THAT stupid,” is delivered in such a way that it’s meant to be a clever put-down. “I’m not interested in mortality. I just want to feed people.” And starting a line of dialogue with “I can’t believe I’m going to say this, but…” does not excuse a character continuing “…that is some seriously sexy pudding.”
The plot is predictable, formulaic, frequently illogical and nonsensical (Why is the daughter of Peter Bowles – played, incidentally by a British actress, American?). The delivery is leaden – pedestrian – linear. The characterisation is frequently unbelievable – such as the relationship between two of Rob’s team. The acting is often weak – the weakest, oddly, being Gordon Ramsay as himself. The mood is uneven – moments of extreme farce and hyper-real sketch comedy are interspersed with serious (well, laughable) drama.
There will come a point where you will find yourself laughing at this movie – not with it, at it. A point will come where you will simply not be able to believe how corny is the line or scene that follows.
By the end, though, you won’t be laughing. You’ll be feeling sorry for the film-makers. No-one sets out to make a bad film, so somehow, at earlier stages of production, several people must have thought this film had a chance to work.
But here’s the thing, and it pains me to say it, but while the writer/director/producer James Hacking deserves some credit for getting his project from his brain onto the big screen, which many dreamers will never achieve, you have to wonder whether it was worth the effort.
Every film-maker has to make a first film, but a first film is a useful arena for experimentation and lesson-learning. But don’t put that on the big screen. Do it quietly. Show it to your friends. But if you show it to the world, it can’t possibly help you get taken seriously the next time.
If you give your script to a range of experienced producers and none is interested, there’s probably a reason for that.
If you give your completed film to a range of experienced producers and none is interested, there’s probably a reason for that.
Experienced producers and distributors known the industry and they know what will work. Pressing on regardless and doing it yourself anyway is foolishly perilous, at least if you’re treating the film business as a film business.
From the plot to the casting, this simply could never have worked as a piece of cinema, but if it’s about vanity – or determination – and you can afford it, then I suppose there’s nothing wrong with showing the world you don’t need them. But don’t expect them to need you.
If you’re trying to carve a career in a highly competitive business, don’t try to forge your own path against the experience of those who know better.
The Blair Witches and Paranormal Activities of this world are exceptions for a reason. And they’re horrors. And so, I’m afraid to say, is Loves Kitchen – with or without its apostrophe.