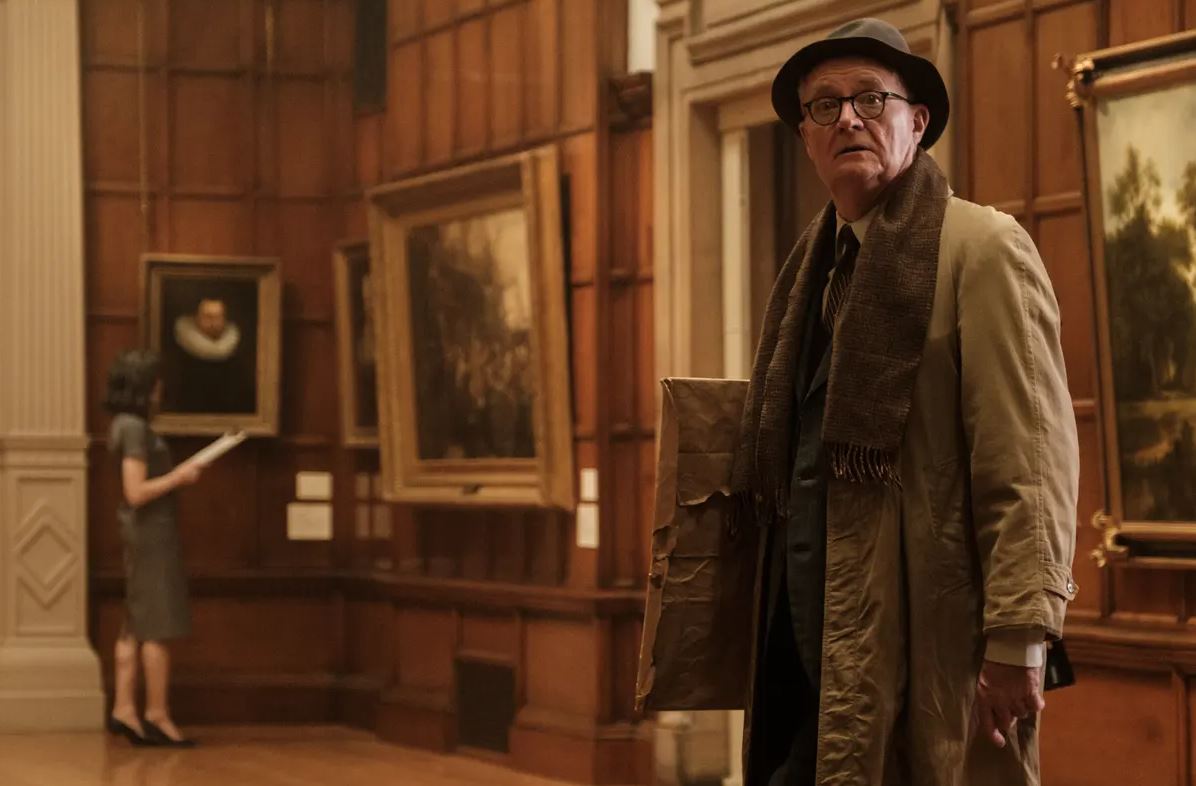 In the early 1960s, Kempton Bunton (Jim Broadbent) has been fired from his job and spends most of his time, sitting at home in Newcastle, writing plays that never get produced and shouting at the TV – until the TV licencing people come round.

He’s happy to spend some time in jail for non-payment, as part of his campaign calling for pensioners to get free TV licences.

Soon after a campaign trip to London, the TV news bulletins are full of stories about the theft of a priceless painting from the National Gallery – the government has recently committed public money to stop Goya’s portrait of the Duke of Wellington leaving the country.

Police initially think it must have been taken by a highly trained gang of professional thieves, but when the painting turns up in Bunton’s wardrobe, this bumbling loudmouth finds himself in the dock for a trial that gives him the public soapbox he’s always craved.

As is often the case, it’s the (based on) real-life stories which seem the most unbelievable – and it doesn’t get much more unbelievable than a bolshie, retired, socialist, anti-TV-licence campaigner being on trial for the theft of one of the most valuable paintings from one of the most secure galleries in the country.

It’s this unlikely anti-hero and his elevation from minor agitator to Public Enemy Number One that provides much of the perverse humour in this peculiar tale. With a name like Kempton Bunton, this eccentric working class campaigner was bound to become famous eventually – but who thought it would have been facing up to the might of the English judicial system, with his exasperated, downtrodden cleaner wife (Dame Helen Mirren) offering him conditional support, while their son (Fionn Whitehead) did  his bit to help.

A twist, towards the end of the film confuses the plot somewhat, but if that’s what’s happened, there’s not really much you can do about that. It changes the tone of the film but at least has the benefit of keeping you guessing a little.

As implausible as the unwinding tale becomes, it just about remains on the right side of plausible, and – in his final narrative feature – apart from starting with an unnecessary flash-forward to the trial, Roger Michell uses an effective structure to reveal the secrets, through a neatly crafted script by Richard Bean and Clive Coleman – the ex-barrister and former BBC Legal Correspondent.

Jim Broadbent is a lively presence in the central role, entertaining us as much as he does the jury, press and public at his trial. Dame Helen Mirren has somewhat less to do, but brings her sense of gravitas and authority to the role. Their performances elevate what might otherwise have been just another quirky low-budget British crime caper. Matthew Goode lives up to his name as Kempton’s defence barrister, who always seems to be swimming against the tide, but with good grace – but Anna Maxwell Martin’s casting in a particularly insignificant role betrays the fact that this film’s release has been delayed – by Covid – from a time before she was one of the biggest names on TV until, sadly, several months after the death of its director.

Although it sometimes feels a little smaller than its provenance, The Duke is always entertaining and mostly engaging, but perhaps the highlight of the film comes during the closing titles, when we’re shown that the real-life theft was so notorious that the eponymous painting featured in Dr No’s lair in the 1962 Bond film. A caption at the end also suggests that the legacy of this self-important petty criminal is that TV licences were eventually made free for the over 75s – since the film was made, of course, this has been reversed.

Broadbent himself has suggested another reversal might have been that his anti-establishment character – were he still alive – might now be campaigning to keep the BBC licence fee, in order to protect the organisation from the government.