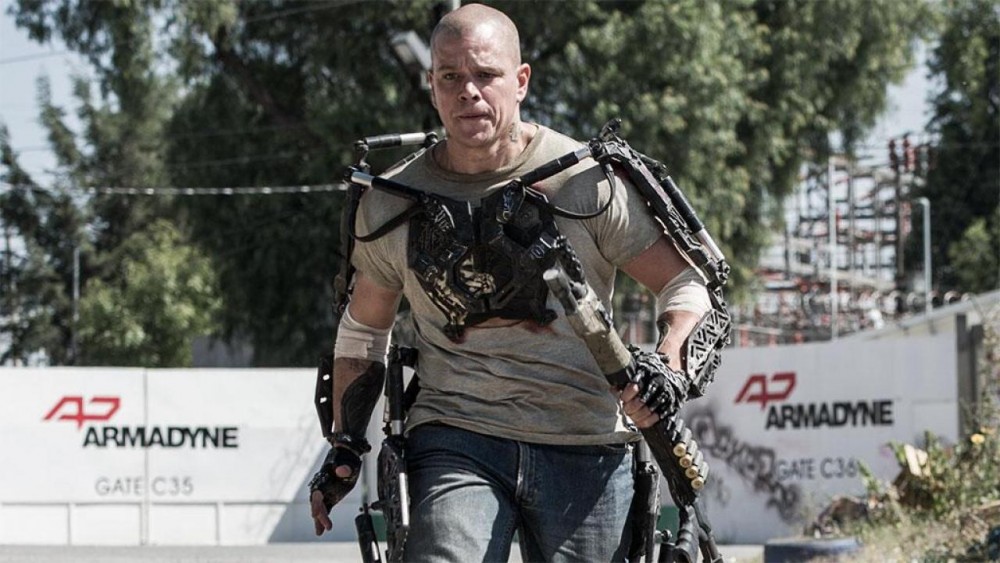 By the middle of the next century, the planet has decayed into an over-populated, disease-infested, poverty-stricken land. The rich have long-since escaped Earth and live on a luxurious space-station, called Elysium, that’s orbiting the planet.

Down on Earth, ex-con Max (Matt Damon) is struggling to make ends meet and he simply can’t afford to lose his job. But an industrial accident leaves him fatally hurt and useless to his company, so his ruthless boss Carlyle (William Fichtner) kicks him out with enough painkillers to last the five days he’s expected to live.

Max’s only hope of survival is to persuade underworld figure Spider (Wagner Moura), who owes him a big favour, to get him a ticket to Elysium, where the medical technology could give him another lease of life.

But safe in the knowledge that he’s holding all the cards, Spider makes Max earn his ticket; he has to kidnap Carlyle, on his way back to Elysium, steal the contents of his brain, and deliver it to Spider so that his rebels can prevent a coup on the space station and take control of it themselves.

Science fiction fans have been eagerly waiting since 2009 to see what District 9‘s Neill Blomkamp would come up with next and with one of the most exciting film-makers to emerge in the past few years teaming up with one of Hollywood’s most bankable stars, in the shape of Matt Damon, expectations are undoubtedly high.

While he doesn’t reach the heights of District 9, Blomkamp has again turned out a superior thriller. While Elysium doesn’t have the complexity or maturity of its predecessor, it’s an effective and efficient action film, imaginative and with similarly political undertones, that don’t feel rammed down your throat.

Many of its themes – corrupt politicians, the rich suppressing the poor, the unlikely underdog battling against the odds – are almost tiresomely familiar, but Blomkamp injects them with a fresh energy.

At its heart, Elysium is a tale of the small man fighting to bring justice to an unjust world, by toppling a corrupt bunch of politicians and business leaders. What’s interesting is that while Damon’s everyman is likeable enough, he doesn’t have lofty ambitions to change anything – he just wants to save himself. The criminal mastermind Spider, too, has only selfish motives for his plan. But despite the fact that our heroes are just thinking about themselves, the by-product of their adventure works towards the greater good. It makes a change for the protagonists to be a little less worthy than we’re used to, saving the day more by accident than design, which is quite fitting against such a gritty, post-apocalyptic backdrop.

A romantic sub-plot is dangled pointlessly like a carrot and snatched away, doing little more than getting in the way of the true substance of the piece.

The main antagonists, Jodie Foster’s treacherous coup-plotting politician and her self-serving, supercilious co-conspirator, William Fichtner’s business leader, are perhaps a little obvious, as they gurn their way through their character arcs – it makes a change to see Foster on the wrong side of justice, but for Fichtner – most recently seen as The Lone Ranger‘s nemesis – he’s long since been typecast as the creepy crook.

The best and most enjoyable villain is Sharlto Copley who – with his band of fellow South African mercenaries – is hired to hunt down Max and Spider. A ruthless hunter, he delights in spilling as much blood as he can – an impressive contrast with his leading role as the hero of District 9.

Elysium would be a little optimistic a one-word review, but it’s an above-average, entertaining and thought-provoking sci-fi adventure, with flaws, but none that kill all enjoyment.