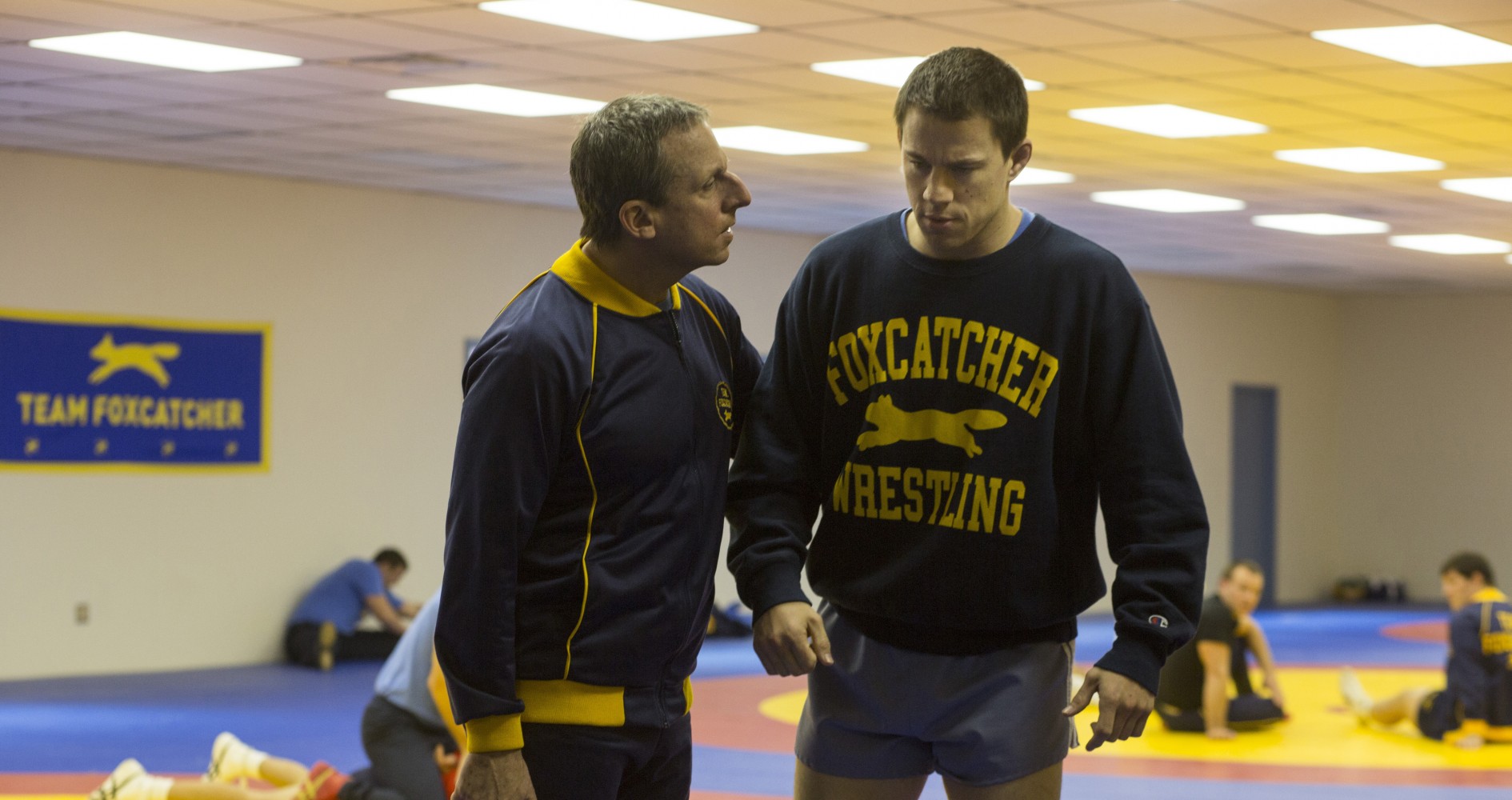 After wrestling brothers Mark (Channing Tatum) and Dave (Mark Ruffalo) Schultz win Olympic gold medals on home soil at the 1984 summer games in Los Angeles, a wealthy multimillionaire, John Du Pont (Steve Carell), invites them to help him set up a wrestling training facility on his family estate in Pennsylvania –  known as the Foxcatcher Farm.

Du Pont – an insecure megalomaniac – is desperate to prove to his domineering mother (Vanessa Redgrave) that he can match her success in horse-racing with wrestling.

Dave – a family man – is the better coach, but he is less interested in moving to Pennsylvania to help Du Pont boost his ego, but Mark is attracted by the big money and status on offer.

As the Seoul Olympics draw closer, the pressure starts getting to Team Foxcatcher and Du Pont’s behaviour starts to become increasingly irrational. He eventually manages to persuade Dave to join them, but Seoul doesn’t turn out to be the success he’d hoped for and bitterness continues to grow.

With the Olympics out of the way, Mark decides to move on, but – in a decision that defines the rest of his life – Dave remains committed to helping a blinkered Du Pont make Team Foxcatcher a force to be reckoned with.

For anyone who isn’t familiar with this surprising real-life story, I won’t reveal the denouement – suffice to say that when it comes, it’s that rarest of commodities in cinema – a true shock.

The success of Foxcatcher depends on three impressive performances from the leads and measured and assured direction from Bennett Miller, of Capote and Moneyball fame.

Not known as the most refined actor, Channing Tatum underplays Mark Schultz with a broody intensity, while the immensely likable Mark Ruffalo makes a perfect foil both for his brother and his boss. But it’s Steve Carell who’s a revelation as the multi-millionaire industrialist, with more money than he knows what to do with, who tries – like a Russian oligarch or an Arab prince – to buy sporting success, so prove himself to his fearsome mother.

Best known for his comedies, while Carell is no stranger to pathos, the psychopathic Du Pont pushes him well beyond his comfort zone. Four-hours a day of make-up make him physically so unrecognisable that you’d be forgiven for wondering why they chose to cast someone with Steve Carell’s voice, but who looks nothing like him. In truth, he doesn’t particularly look like the real Du Pont, but changing his appearance helps the audience forget about Anchorman‘s Brick Tamland or the 40-Year-Old Virgin’s Andy and delivers one of cinema’s most creepy antagonists for years. In Knocked Up, Kathryn Heigl’s character is commended for the rare achievement of managing to make Carell look like an ass-hole. Miller manages to make him look a whole lot worse than that.

With theatrical simplicity, Miller and his cast thoughtfully touch on the perils of big money without trying to be political. It’s a slow-burning tale that takes in themes as varied as sporting dreams, loyalty, morality, pride, status and paranoia. The film’s main weakness is that there is no one character for the audience to identify with from start to finish, making it less of an emotional journey than a broader experience.

Interestingly, at the time the film premiered in Cannes, the team were proud of the support they’d received from survivors of this tragic story, and boasted about how the Schultz family saw the film as a fitting tribute. But controversy has more recently erupted, after some American critics read a homoerotic subtext into the story.

For those familiar with the real-life events, there’s much to enjoy – for want of a better word – in the competence of everyone involved in this project, but for newcomers to the inexplicably and pointlessly tragic Du Pont scandal, it’s a haunting story that minds will be wrestling with for some time to come.