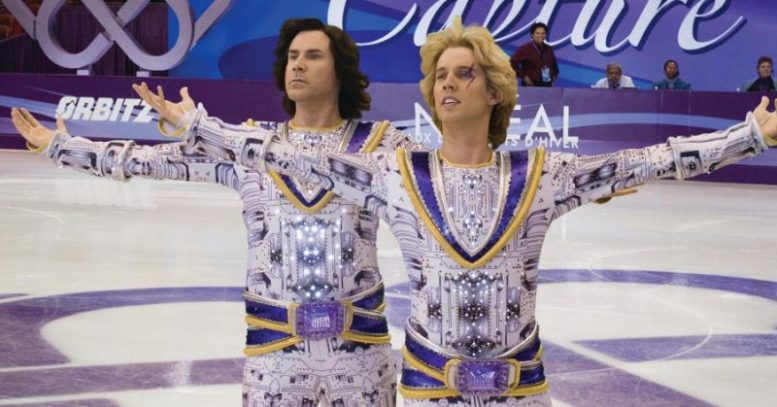 Ice skating fans around the world are hooked to their TVs to find out who’ll come out on top, every time the world’s two greatest figure skaters compete.

But when the butch and manly womaniser Chazz Michael Michaels (Will Ferrell) and weedy, effete Jimmy MacElroy (John Heder) tie for the Olympic gold medal, they end up fighting each other on the podium, and both get banned from men’s figure skating for life.

Chazz ends up skating in a kids Christmas show while Jimmy finds himself selling ice-skates.

But when skating a coach (Craig T Nelson) discovers that the rules would allow the two rivals to skate as a pair, the two find a new lease of life.

Putting their differences aside to form the world’s only male pair, they have to fight off the determined competition from outlandish brother-and-sister pair Stranz (Will Arnett) and Fairchild (Amy Poehler) Van Waldenberg, who’ll do anything to be the world champions.

From the plot, it sounds like it’ll be silly, but it’s actually silly and funny – far funnier than it has any right to be.

It’s one of those oddly successful films that blends puerile comedy with unexpected warmth and morality.

Every character is, of course, pushed way past the extremes of caricature, but to highly amusing effect. The good are emetically good, the bad are thumb-twistingly bad and the stupid are brain-mashingly stupid. Ferrell’s cantankerous sense of self-importance and Heder’s determined naivety are oddly endearing – and Jenna Fischer’s love interest is nicely balanced.

Even the most obvious and predictable gags are so well executed that all but the most stoney-faced viewers will find it hard not to chuckle – and some of the visual gags will have even the girls wincing and reaching protectively for their crutch.

The plot is well paced and the choreography – OK, the special effects (do you really think the guys can skate?!) – adds an almost fairytale level to the action.

The humour bears striking similarities to some of Ferrell’s previous films – Talladega Nights, Anchorman, Zoolander – so it’s not at all surprising to see his frequent collaborator Ben Stiller’s name listed among the producers, but with that in mind, it’s almost a shame not to have seen him turn up for a cameo.

It’s another welcome addition to the increasing Farrelly Brothers-style stable of movies featuring warm-hearted, ironic and at times intelligent humour, dressed up in verbal and visual slapstick.