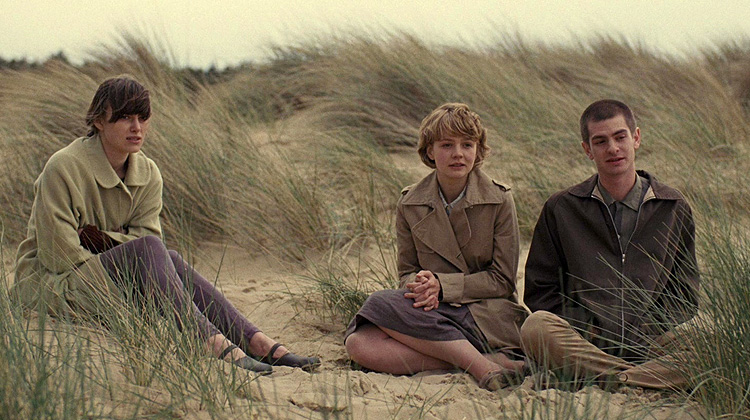 Kathy, Tommy and Ruth attend a boarding school at some undefined point in English history, but it looks like it’s probably early to mid twentieth century.

Oddly, for the time, all the children wear electronic tags on their wrist, to enable them to check-in every morning as they pick up their medication.

A rather stern head-mistress (Charlotte Rampling) informs them that it’s even more important for children at Hailsham to keep healthy, than it is for other children.

A new teacher (Sally Hawkins) finds out why these children are different, feels they have a right to know, and is fired for spilling the beans.

By now, they’ve accepted their fate – unlike other youngsters, they exist only to provide donor organs to sick people in the wider community. While they all end up as donors eventually, some of them get to spend a few years as carers first, nursing the others between each donation, until they finally complete.

At the halfway house, there’s a clear attraction between Kathy and Tommy, but Ruth forces her way into Tommy’s affections, after rumours abound that anyone who can show they’re in love can have their donations delayed.

Some years later, the three have been separated. Kathy is working as a carer. Tommy has already made a couple of donations and its growing weak. Ruth, also close to completion, is feeling guilty about having kept Tommy and Kathy apart as teenagers.

Ruth manages to bring Kathy and Tommy together again, and the pair set off to find out whether by declaring their true love, they can indeed delay the donation process so that they can be together.

Never Let Me Go, from Kazuo Ishiguro’s novel of the same name, is a hauntingly beautiful, bitterly dark drama, that succeeds on every level – until you start to break down what’s actually going on – at which point it crumbles.

It’s one of those examples where it’s difficult to criticise a film for its plot, when the plot was laid out in advance by a novel, so any blame for incoherent or unexplained story elements must lie with the producers for deciding to adapt the book in the first place or the writer for missing out important parts of the novel.

Whether it’s the fact that Hailsham would surely not have hired a teacher who didn’t know about its pupils, or the fact that in reality, if a society were to breed people simply to act as organ donors, they’d surely donate them all at once, rather than get sicker and sicker, weakening the remaining organs, as they lose them one at a time, very little feels at all believable about this chilling alternate reality.

When the film opened the London Film Festival last year, the main actors chose not to reveal the “twist” about them being organ donors, selling it simply as a drama about boarding school children, taking away any of the originality it might have had. I don’t feel bad about revealing this though, since it is the key plot point around which the whole film revolves, it’s revealed to the audience clearly within twenty minutes and even referred to in Kathy’s opening monologue.

As a film about donating organs in itself, even that element isn’t particularly original – in Ewan McGregor’s The Island, individuals cloned themselves in case they got ill and as recently as last year, Jude Law’s Repo Men explored similar territory, but with mechanical organs.

Never Let Me Go does at least touch on why these individuals should be seen as lesser than those in the outside world who use their organs and raises the issue of whether there are better ways to ensure that there is a plentiful supply of organs, but while big issues are alluded to, there’s never any attempt to answer them. If ever there was a case of style over substance, this is it.

Carey Mulligan is the only one who truly comes off well from this film, partly because her character is the most believable and sympathetic but also because her natural talent shines through.

On the surface, this film looks and feels like it had high hopes of awards recognition, but when you chip away at the veneer, you can see why, apart from the British Independent Film Awards, it has pretty much come away empty handed.