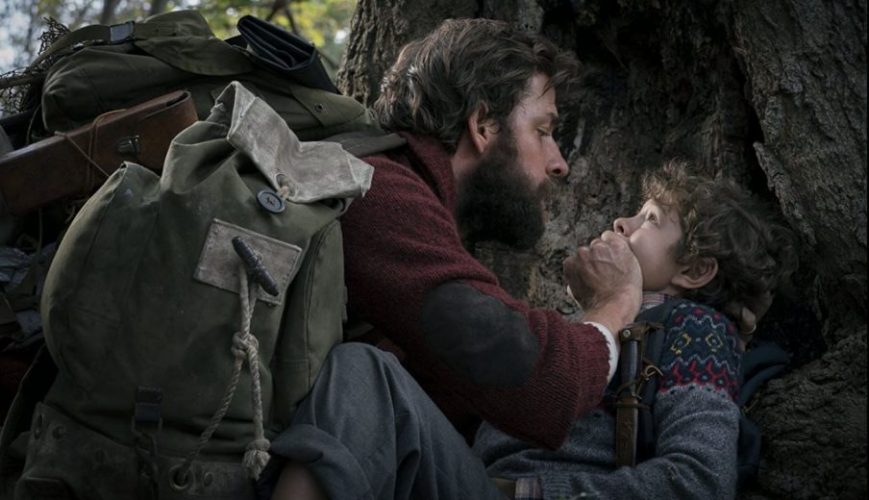 Set a few years in the future, in a post apocalyptic world, a family of five’s survival is dependent on them not making a sound because “if they (human eating alien creatures) hear you they hunt you.”

Never has the sight of a pregnant woman filled me with so much abject fear and sheer panic as in this dark and brutal horror film by actor turned director John Krasinski.

His début feature at the helm is an impressive master-class in suspense and bone chilling frights, where less is more, and in which hardly a word is uttered throughout. The characters communicate via sign language which is subtitled (so choose your seats wisely), which must be a first for a Hollywood horror film. While sound and the lack of it both play prominent yet sinister roles.

This lean and mean drama opens with a killer scene which sets the hair raising tone for the rest of this terrifying movie, which left the paying audience I saw this with on total edge and cowering behind their coats.

Krasinski, who was an executive producer and co-wrote the screenplay, also stars alongside his real life wife Emily Blunt as her on-screen husband. Blunt delivers a powerhouse performance as a mother of three who goes to hell and back to keep her family safe as the impending birth of her baby looms ever closer. It’s a simple but genius plot device that fuels the ever-mounting nail-biting tension. Every gamut of emotion and thought is reflected on her face, which must be one of the most expressive in cinema today.

Nevertheless she is given a run for her money by Noah Jupe (Suburbicon and Wonder) and Millicent Simmonds (Wonderstruck) who play her on-screen children. The pair are phenomenal and totally engaging. Simmonds, who is deaf herself, portrays Blunt’s angst ridden deaf daughter and the character’s deafness adds yet another fascinating layer to this heart-stopping horror.

You learn little to nothing about the how or why the monsters came to invade the planet except that they have exceptionally acute hearing and are attracted to sound. To be honest it doesn’t really matter.

Krasinski racks up the tension by giving the audience snatched glimpses of these creatures and by holding back on the full reveal for as long as possible.

He insists this is a film about family, not human-devouring monsters, and it is in fact a love letter to his own children.

For someone who says he hates horror movies, Krasinski seems like a natural and an old pro. Frankly I can’t wait to see what genre he tackles next.