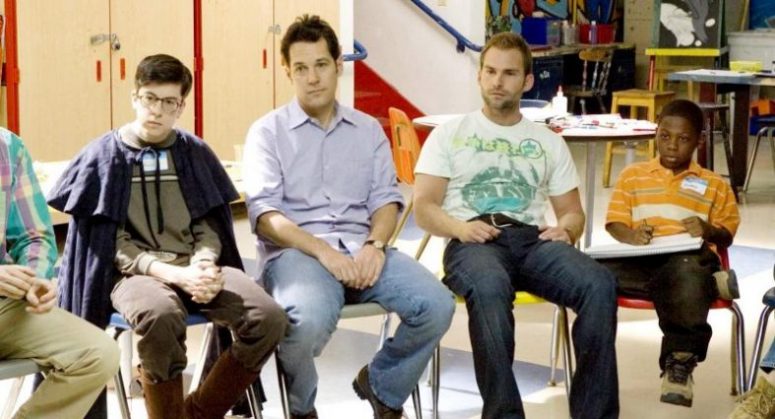 Short tempered Danny (Paul Rudd) feels that his job is beneath him. He travels to schools, giving presentations to sell an energy drink – at his side is his colleague – the closest he gets to a friend – Wheeler (Seann William Scott), dressed as an elk, or some such horned mammal.

He’s just been dumped by his high-powered lawyer girlfriend Beth (Elizabeth Banks), so he’s not in the best frame of mind when he and Wheeler get involved in a fight at a school and find themselves facing jail.

Out of the goodness of her heart, Beth negotiates with the court to help them escape prison and instead do some community service. These two losers, who practically destroyed a school, are sent to be role-models to underprivileged kids.

Danny ends up with Augie (Christopher Mintz-Plasse) – a role-play playing nerd — and Wheeler gets Ronnie (Bobb’e J Thompson), a ten year old black kid with more attitude than Eddie Murphy and Chris Rock rolled into one.

Things obviously don’t go too well – through a series of “hilarious” mishaps, the pair end up getting thrown out of programme.

You’ve only got to look at the cast and you’ve got an idea of the kind of humour you’re in store for with this one. Paul Rudd has recently become part of the Apatow clique, while Seann William Scott is a veteran of such crass comedies as American Pie, Road Trip, Old School and Dude Where’s My Car.

This film is closer to the Apatow end of the puerile scale – achieving what only Hollywood can do – provide a childish, predictable and incoherent plot which still manages to take you on an emotional roller-coaster that leaves you with a tear in your eye.

Comedy snobs will walk in hoping to hate it and kick themselves on the many occasions they find themselves laughing out aloud – not because the humour ever comes close to being clever – but because Scott’s charming naivety wins you over while Rudd’s cantankerous nature – like a sub-Larry David – will strike a chord with many people who can’t work out why the world always seems to have it in for them.

The kids are irritating – but they’re meant to be. They’re not really that funny – which they presumably are meant to be. And at times – particularly during the endless role-playing scenes – the film drags.

But it’s far more enjoyable than it has any right to be.