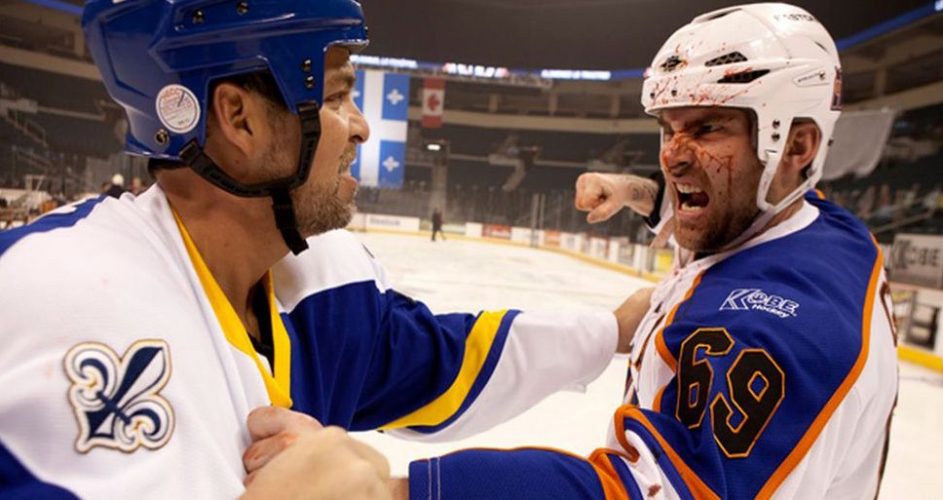 Doug (Seann William Scott) is the black sheep of the family – he’s not a bad guy, just a bit of a gormless failure, when compared with his highly educated and successful brother Ira (David Paetkau).

Doug has no qualifications – he can hardly string two words together – but he’s good with his fists and earns a living as a bouncer.

His social life is pretty empty too. His puerile best friend Ryan (Jay Baruchel) presents an ice-hockey show on a local TV station and sometimes takes him to the games, but that’s about as exciting as his life gets.

But at one game, a player who gets sent off picks a fight with the audience, clambers up the bleachers to punch Doug and ends up a bloody heap on the floor. In an instant, the team’s coach hires Doug; not for his hockey playing – he can’t even skate – but having muscles like that on the team can’t hurt. He’s not a hockey player, he’s a goon.

Doug’s thuggery on the ice becomes legendary and soon, he finds himself playing in the big leagues. Again, rather than being hired to play, he’s brought in to protect a top player whose form has waned since he got beaten to a pulp on the ice by the only man whose fists are more feared than Doug’s, Ross Rhea (Liev Schreiber), who – nearing retirement – is looking for one last big fight before hanging up his skates.

The scene is set for these two goons to meet – and heat up Canada’s ice hockey season with a contest to end all contests – that doesn’t even require a puck.

Goon has a heart, which is odd to say for a film that’s so shamelessly about mindless violence.

It’s also oddly likeable as a sports movie that’s actually anti-sport, hailing as heroes the men who use their fists to floor their opponents, rather than their sticks to pass them with the pucks.

The film-makers also throw in a romantic storyline, with our brutal, but sweetly innocent protagonist falling for the man-eating Eva (Alison Pill) – a cute girl who’s bowled over by his heart-warming nature, rather than his physical prowess.

At its heart, Goon feels like it should be the archetypal sports underdog movie, but its puck fails to hit the back of the net, being slid off in different directions by its own unevenness.

Last year’s Warrior was a film that idolised fighters against a dramatic background, but the fighting was the sport Tom Hardy and Joel Edgerton were meant to be competing in and it succeeded as a film, not least by sticking rigidly to a convincing dramatic narrative and presenting the consequences of the violence with brutal reality.

The fighting in Goon is – necessarily – inelegant scrapping and slapping, the injuries ugly – though not comically so – and the brawling just doesn’t have the cinematic grace to classify it as a fight film.

This won’t worry the film-makers, as it’s not trying to be a classic fight film, but it’s also trying to be a gross-out comedy and it fails on that front too.

Gross-out comedy about violent sport has been done in films like Dodgeball, which worked because the comedy effectively infused the situations and characters.

In Goon, the characters aren’t funny, the situations aren’t funny and Seann William Scott – known, since American Pie, as the wild and crazy funny guy – is playing it straight. The film’s co-writer Jay Baruchel gives himself the “comedy best friend” role, but he’s not funny either – his potty-mouthed misogyny grates from the start.

To get an idea of the film’s humour at its worst, when Doug is offered to pick the number he wants on the back of his shirt, Ryan suggests 69, because that would be – like – soooooo funny. That he actually takes it betrays the fact that Baruchel, the writer, actually thought the joke was funny, not ironic. Goon might actually have been more successful and less uneven if writer/producer Baruchel hadn’t tried so hard to find a role for actor Baruchel.

The film – unlike its protagonist – manages to overcome failure.

It ticks enough boxes to appease the post-pub Saturday night audience, but swinging violently, as it does, between failed gross-out comedy and clumsy, predictable and unambitious sporting action, it packs the sporting and emotional punch of a goal-less draw.