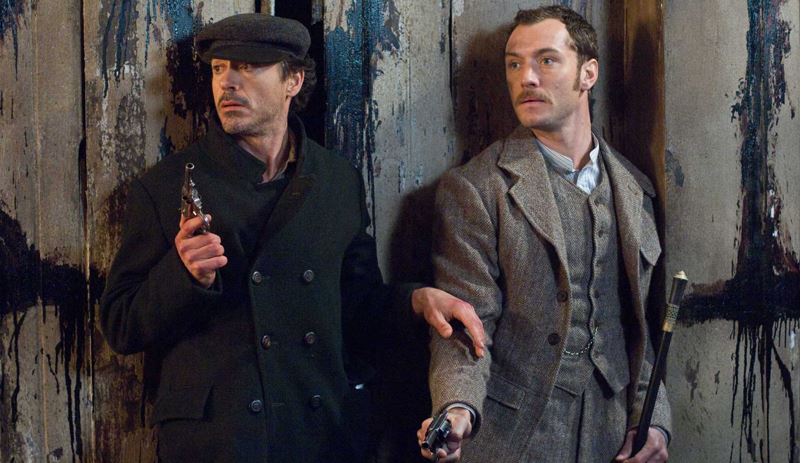 Long after they’ve rounded up their suspects, Inspector Lestrade (Eddie Marsan) turns up with his officers – unsure whether to be angry at Holmes’s meddling or relieved that the job is done.

After Blackwood’s execution, Dr Watson is called upon to confirm that he’s died, and then the two men put the whole episode behind them.
Holmes is at that odd point in his life where he doesn’t really know what to do with himself – firing bullets into the wall seems to pass the time.

Watson can’t take any more and decides to put some distance between them, by moving into new offices and settling down with his fiancée.

An unexpected visit from his own paramour, Irene Adler (Rachel McAdams), injects new life into Holmes. The only criminal who’s ever evaded him – she’s also stolen his heart, and when she asks him to help her boss find someone, he jumps at the chance.

The mission proves more complicated than he expects, so Watson ends up coming along for the ride, as they uncover a string of murders and corruption in high places, all leading back to…Lord Blackwood.

Sherlock Holmes as street-fighting action hero, with neither a deer-stalker nor a pipe in sight, is perhaps not the way we’re most used to seeing Britain’s most famous detective, but it’s oddly compelling.

Robert Downey Junior always has a tremendous screen presence and even with a slightly dodgy English accent, he manages to pull off the role of this troubled genius – by turns loopy and intuitive beyond belief.

Jude Law is more of a foil, with little to do himself but react to each unpredictable move from Holmes.

The story is – as you’d expect – a little over-twisty with rather too many people doing too many things. It can be hard to keep up, especially when Guy Ritchie is throwing so much action and intrigue at us in the meantime. It does seem like we’re being overloaded at times. But like most detective stories, we do get the helpful scene at the end where our eponymous hero (works equally well for Poirot or Marple!) explains every last detail to us, in case we’ve been left behind.

The production design is impressive – presenting us with an 1800s London, where Tower Bridge is still under construction, and other familiar landmarks seem suitably youthful.

There are only a couple of the kind of directorial flourishes that we might have expected from Guy Ritchie, harking back to his Lock-Stock and Snatch days, both of which he gets out of the way in the first act, but he manages to sustain the action, excitement and tension throughout.

The plot is, frankly, silly, and isn’t really worth expending too much energy on, trying to work it out in advance, and there’s little genuine emotion on display between the characters – either the buddies at its heart or the men and their women – but the film looks sumptuous, moves along briskly and keeps you entertained.

After some recent failures at the box office, one might have thought Guy Ritchie was losing a bit of clout, and to allow someone with his unpredictable reputation to play with such a national treasure was undeniably brave, but someone clearly saw fit to trust him with a big budget and two of the hottest stars on the big screen. The film isn’t going to change the world, but if their aim was simply to entertain, their gamble has paid off and Ritchie himself will undoubtedly live to fight another day.