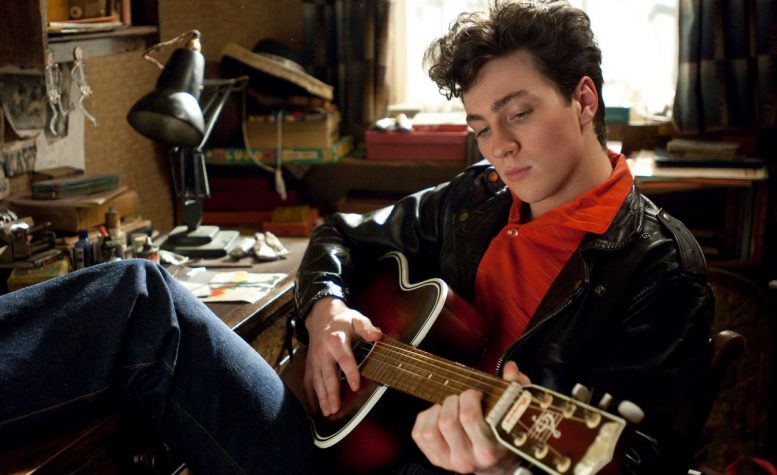 In late 1950s Liverpool, John Lennon (Aaron Johnson) is living with his uncle and aunt Mimi (Kristin Scott Thomas). We join John’s story as his uncle dies and his estranged mother Julia (Anne-Marie Duff) turns up at his funeral.

The flighty soul that she is, she desperately wants to earn his love and work her way back into his life, but Mimi is worried about the influence her sister might have on her charge.

When John starts socialising with his mother, to outsiders, they almost appear to be on dates, sharing intimate, humorous moments – she even goes so far as to tell him that she loves him.

When Julia buys him his first guitar, his eyes light up and he discovers his passion for music, but Mimi takes it back to the shop in disgust.

But music is his escape and nothing – certainly not family drama – is going to stop him putting together his band, The Quarrymen, with his young guitar-playing friend Paul McCartney (Thomas Sangster).

As is often the case, for her debut feature film, the artist Sam Taylor-Wood has picked the life of a well-known figure, but a less-known period of his life.

There’s much discussion and debate about some of these relationships – not least how close he appeared to become to his mother – so we have to take Taylor-Wood’s word for a lot of what happens, but it’s always safest in films to treat them as a story rather than gospel truth anyway.

That being the case, one of the problems with this film is that the story at its heart – of a teenager from a broken home, trying to come to terms with his background, while contemplating his future – doesn’t feel tremendously fresh. Because it isn’t.

It’s only really the fact that this particular teenager happens to be called John Lennon that gives this film an edge. But a story needs to work on its own merit and not be dependent on the fact that we know who he grows up to be. Would we be interested in another teenager going on the same emotional journey? Probably not. And is it a surprise that one of the most influential figures in modern musical history had a troubled childhood? Don’t most artists?

But there is much to admire in this film. Sam Taylor-Wood does what she can with the script – delivering a breezy film that uplifts you and tugs at the heart-strings when it needs to. But an attempt to explain the friction between the two women is as blunt as it is unnecessary.

Aaron Johnson is a likeable enough screen presence, but this film belongs to the women. For much of the film, Aunt Mimi seems to be trying to swat his mother away, like a mother would an unsuitable girlfriend – Nowhere Boy is as much about the battle between the two women who shaped John’s young life as it is about the life that was being shaped. The steely Kristin Scott Thomas and fragile Anne-Marie Duff are at the top of their games, with characters that are respectively repressed but responsible and childishly innocent but depressive.

Perhaps what’s most important for a film about the days before The Beatles is that it has a good sense of the period and you are left with the sense that these boys might actually be going somewhere.