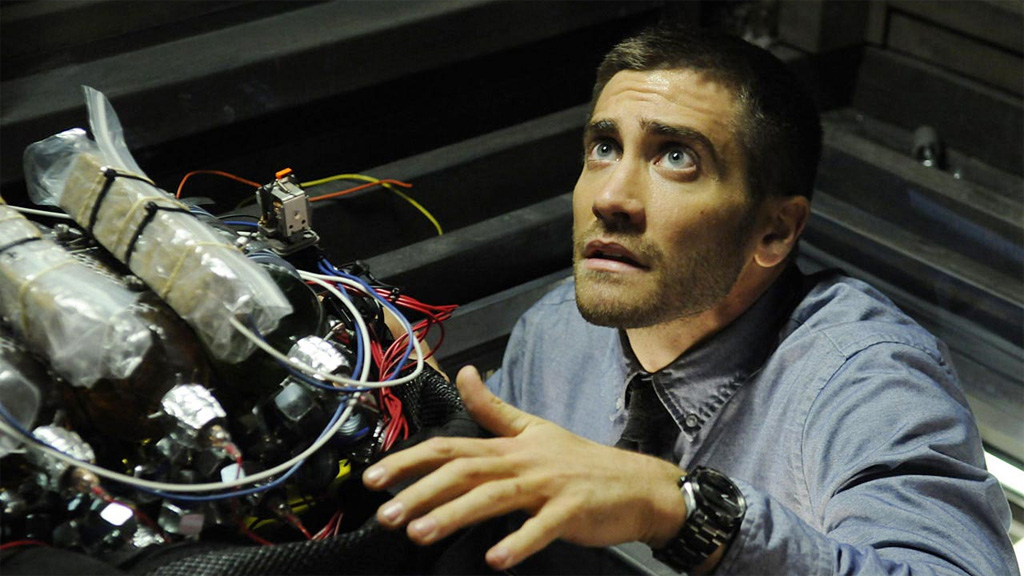 US military pilot Colter Stevens (Jake Gyllenhaal) is dozing on a train. He wakes up opposite Christina (Michelle Monaghan) who’s talking to him as if they know each other, but he has no idea who she is. He doesn’t even recognise the name she calls him.
As he’s trying to work out what’s going on, the train explodes. Suddenly, he wakes up, confused, in the cockpit of his helicopter, with his command centre trying to get some sense out of him.
Goodwin (Vera Farmiga) back at base informs him that he’s been assigned a new mission as part of a top secret project called the Source Code. The project’s designer, Dr Rutledge (Jeffrey Wright) explains that it enables Colter’s conscience to be put into the body of another man, for the last eight minutes before he dies, in order to try to change the future.
In this case, the authorities believe the man who’s blown up the train is planning to detonate a dirty bomb in Chicago several hours later.
By being sent back into the body of Christina’s friend in the train, eight minutes before it explodes, can Colter work out who the bomber is and stop him launching a nuclear attack on Chicago?

After coming out of nowhere and impressing the film world with his debut feature Moon, Duncan Jones is back with an equally impressive follow-up.
Source Code is much bigger and bolder but shares Moon’s concentration on a single character, who becomes increasingly confused about his environment, the more he tries to understand it.
In the early stages of the film, it’s not quite clear whether we’re watching a time-travel film or whether it’s all in his mind – ideas which have been seen often in a wide range of films – but the lack of clarity keeps you on your toes.
You – like Colter – are keen to find out what’s going on.
It turns out to be a thoroughly imaginative film about a shocking project that you could imagine the US military would put into effect, if only our technology were far enough advanced.
The film is clearly far fetched, but it works as an exciting thriller, within the highly original boundaries it sets itself.
By its nature, the film has a repetitive narrative, as he keeps going back – Groundhog Day-style – and reliving the same eight minutes, over again, each time tweaking what he does to learn more to help him affect the future.
Jeffrey Wright is a suitably creepy mad scientist, but the women don’t really have much to do. Vera Farmiga just sits there delivering instructions, only latterly developing any kind of a personality, while the beautiful Michelle Monaghan serves as little more than Colter’s foil – initially inadvertently confusing his mission and later being the sexy side-kick that every action hero needs.
Jake Gyllenhaal fits comfortably into the Bournesque role of the highly trained operative who finds himself hopelessly out of his comfort zone.
After two of the most fascinating and enthralling films of the past two years, Duncan Jones unquestionably has an exciting future ahead of him – a young British director hot on the heels of Christopher Nolan.