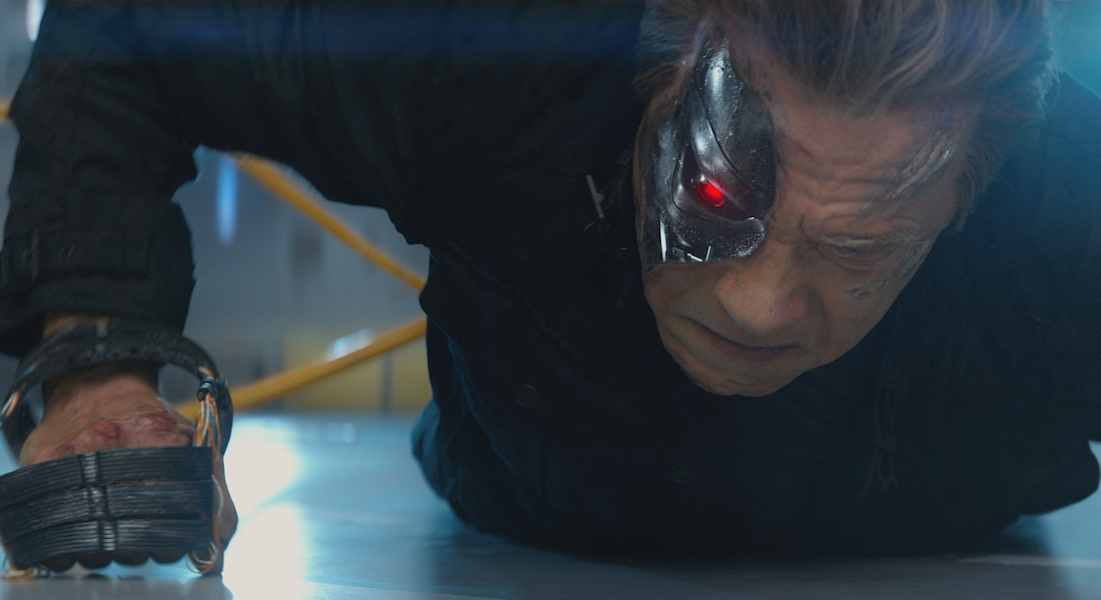 In 2029 resistance leader John Connor (Jason Clarke) sends his top soldier Kyle Reese (Jai Courtney) to 1984 to protect his mother Sarah Connor (Emilia Clarke) from the Terminator (Arnold Schwarzenegger) that has been sent back in time to kill her but when Kyle arrives there nothing is how he expected it to be.

Sarah is no longer a naïve waitress but  a gun toting bad ass who is fighting a liquid changing T-1000 (Byung-hun Lee) with the help of her Guardian/T-800  (also  Schwarzenegger) – the Terminator  who raised her from the age of nine and who she calls “pops”.

Sarah and Kyle then travel to 2017 to destroy the artificially intelligent anti-human computer system Skynet once and for all by stopping the launch of its killer app, Genisys, a Trojan horse which will ensure the machines control the human race and thus take over the world.

Set in an alternate universe this fifth instalment in the series is a bizarre mash up of James Cameron’s classic Terminator films which pays painstaking homage to those movies while resulting in a convoluted time travelling mess.

While Cameron’s iconic films established the sky high bar for franchises to come up with their mind blowing plots  and ground-breaking special effects Alan Taylor’s sequel is merely derivative. It lacks the ingenuity and wow factor of Cameron’s work and relies heavily on non-stop car chases, crashes and shoot outs which have been ripped off from Terminator 1 and 2. It is also devoid of its predecessors’ knife edge excitement and killer thrills.

Furthermore if you haven’t seen the first two films then this will make even less sense and you certainly won’t be able to appreciate all the detailed nods and winks to these iconic movies.

On the plus side it does completely ignore the existence of the hideous Rise of the Machines and Terminator Salvation which is a blessing.

Interestingly Cameron (who had absolutely no involvement in Terminator Genisys) has praised and endorsed this as “the third film” in the series.

Meanwhile Emilia Clarke (Game of Thrones) gives a solid performance as Sarah Connor although she isn’t as formidable as Linda Hamilton who truly made the role her own or as scary and commanding as her alter ego the mother of dragons.

But Arnie is the saving grace playing three versions of his Terminator self.  Watching him fight his younger 1984 self is quite surreal.  The fact that he is old and grey by the end is explained away by Sarah who reveals his skin can age.

As he keeps uttering “I’m old, not obsolete” you can’t help wondering if like the T-800 this franchise is long past its shelf life.