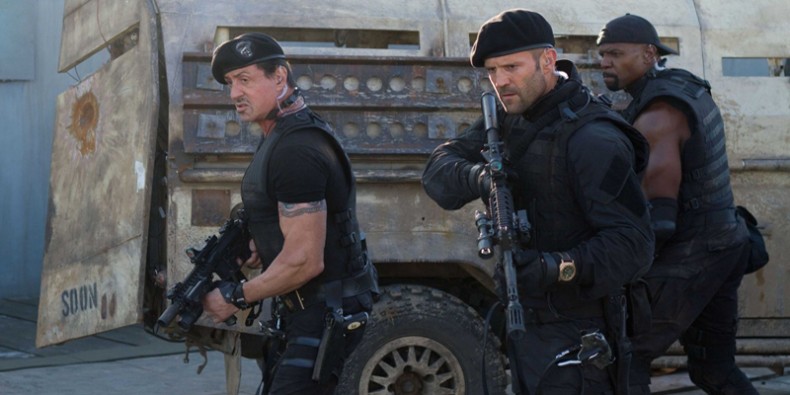 Barney Ross (Sylvester Stallone) and his band of ex-military mercenaries still have a debt to clear with Church (Bruce Willis).

He says he’ll wipe the slate clear if they head to Albania and bring back a box, to keep it out of the hands of the bad guys. He won’t say what’s in it. Church also insists that safe-cracker Maggie (Nan Yu) goes with them.

Barney isn’t happy about “babysitting” a girl, but in the interest of getting Church off his back, he agrees.

The Expendables manage to retrieve the box – but so early in the film that you know it can’t be that simple. As they prepare to head home, they’re ambushed by the bad guys who escape with the box.

The Expendables – with Maggie in tow – set off in search of the box, knowing that failing to track down the European master criminals is not an option, as the safety of Western world is at stake.

This is everything that the Expendables should have been but wasn’t.

The first film took itself seriously, which was a big mistake.

Bringing together pretty much every 1980s action star except Jean-Claude Van Damme, with a cameo from the then Californian governator Arnold Schwarzenegger, the first outing of our mercenaries was a bloody, incoherent, pompous mess.

But this time, they’re having a laugh. The stars throw around each other’s catch-phrases and there are jokes at the expense of their ages and appearances.

In his first full role since leaving his political career behind him, Schwarzenegger is as entertainingly self-mocking as the rest of the crew.

The younger members of the cast have less of interest to do.

The story is clearly nonsense and every bit as incoherent as its predecessor, but the atmosphere is a winner – and appearances (one significant and the other a little contrived) of some of the other 80s action heroes are tremendous fun.

It is almost certainly the most bloody, violent film of the year so far, with blood showering from wounds and spattering on windows like it was going out of fashion.

But the BBFC gave it a 15 certificate, because the fighting was moderated by what it fairly describes as “comic relief” and because while you see plenty of blood, the camera never dwells on the detail of gore or on the infliction of injury.