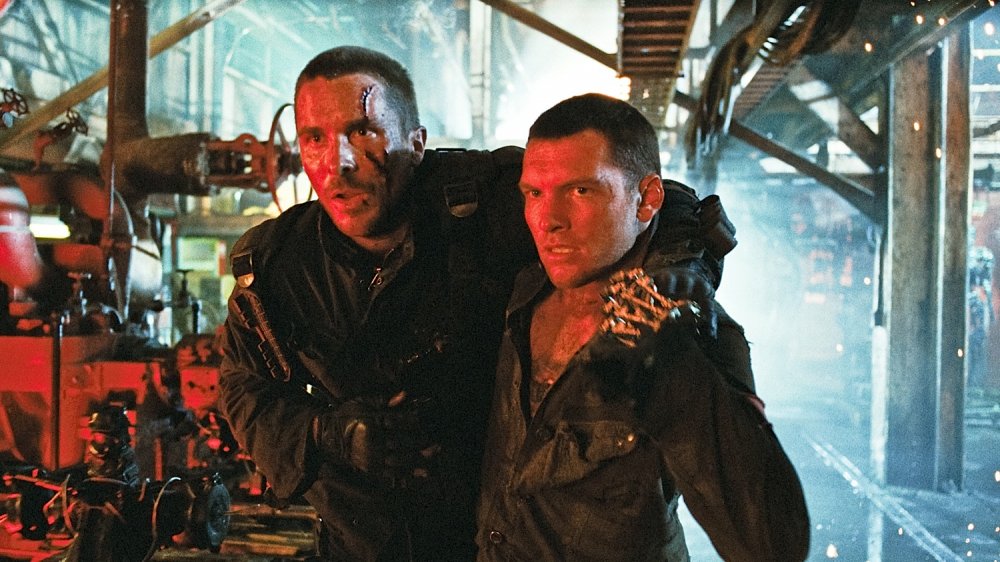 Marcus Wright (Sam Worthington) is about to be executed for a brutal crime. Dr Kogan (Helena Bonham Carter) persuades him to give his body to medical science – not that it’ll be in time to save her from cancer.
Fifteen years later, Wright finds himself stumbling, confused, through a skeletal LA, razed to the ground by a nuclear war that was won by Skynet’s machines and giant robots. Inadvertently alerting them to his presence, he’s pulled to safety by a bold teenager, Kyle Reese (Anton Yelchin), uttering the immortal line “Come with me if you want to live.”
Reese knows that to survive, they need the protection of the resistance, led on the ground by John Connor (Christian Bale). He takes his orders from commanders in the relative safety of an off-shore submarine.
Skynet is trying to round up all the humans, take them to its base, kill some and turn others into cyborg warriors – the kind you might be familiar with from previous Terminator films. John Connor’s mission is to reach the base and set his fellow humans free.

One of the interesting things about film franchises is that by the time you reach Number 4, there’s already an archive to digest before tucking in. Indeed each of this film’s three predecessors was shown on TV in the past week.
For broadcasters, the publicity of the new film and the popularity of the old ones, will boost ratings – and for the distributor of the new film, the TV screenings will whet fans’ appetites and stimulate audience growth.
Perhaps more than any other “No. 4,” this is a film that might benefit from watching the previous entries in the canon. Compared with the previous three, which flip back and forth in time, this storyline is linear, but without background knowledge of its world, it’s not so much difficult to follow, but pointless to follow.
Visually, it expands on the opening post-apocalyptic scene of the first movie – in parts, injecting giant robotic Nazis into the bleak world of Mad Max.
It’s a mind-bending challenge to work out where this fits into the bigger scheme of things – there’s an adult John Connor and a teenaged Kyle Reese (revealed in part one to be his father) – Wright’s “terminator” is less advanced than those seen in the earlier films, which were sent back in time from further into the future.
There’s something disappointing about a newer film having deliberately older, less impressive technology – requiring less impressive effects. After seeing Robert Patrick melt and reform himself, the idea of a heart beating inside a robot somehow fails to excite – even if it seems closer to reality.
Skynet’s people-carrying aircraft are impressive, with independent fighters breaking off to bolster their defences, and the mini-robots on motorbikes, sliding down the legs of their giant counterparts are equally stylish. But their main purpose – almost certainly – is to boost the merchandising possibilities, because without Arnie (apart from a brief CGI cameo – at least I presume it’s computer generated, as I can’t imagine the Governor of California getting his kit off for this!), you can’t really imagine children eager to play with Bale and Worthington dolls.
Perhaps this film’s biggest weakness, rather than a slight storyline, contrived plot-points (where do they get their food and ammunition and how can the humans expect to outwit the machines with technology?) and rather wooden acting (director McG is much better with action than he is with actors) is a complete lack of the knowing humour that pervaded its predecessors.
It takes itself too seriously, although admittedly, the dark future it portrays isn’t particularly conducive to the kind of humour that was previously generated by the fish-out-of-water situation created by putting a futuristic robot in modern-day LA. Here, everyone’s out of place.
A handful of references – yes, someone does announce his intention to return, in the words immortalised by Arnie – do raise a smile, though.
Oddly, although this is much darker than its predecessors, whereas the first film was released with an 18 certificate, this is rated 12A. Maybe it’s because this tackles, more, the threat of violence, rather than violence itself. Maybe it’s because here, the violence is directed mostly towards machines rather than humans. Maybe, 25 years on, we’re just more accustomed to this kind of blockbuster bodycount.
Sadly, for the producers, the TV screenings – of Nos 1 and 2 at least – serve only to highlight how much more clever and entertaining they were.
But ending the film a decade before part one began, you can be almost certain that somewhere out there, a Terminator “will be back!”