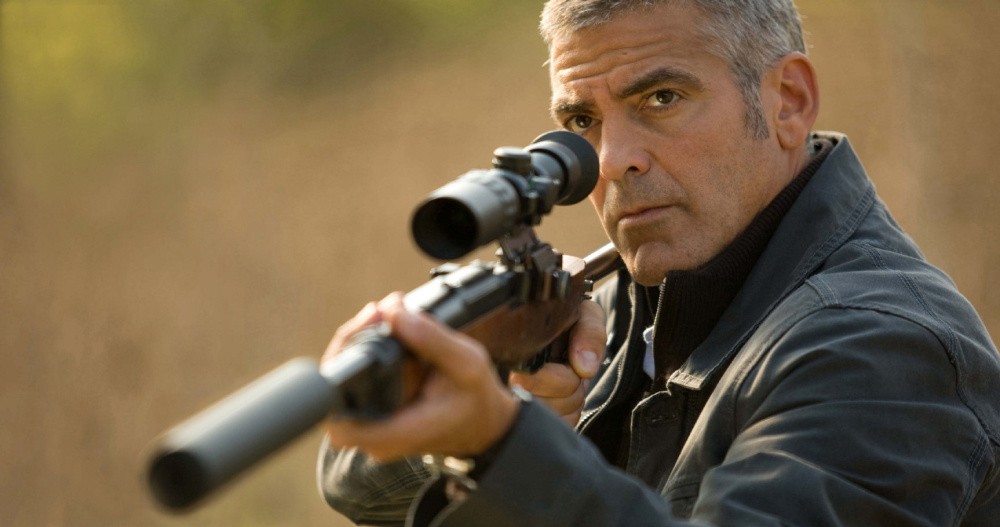 Jack (George Clooney) is otherwise known as Edward, or Mr Butterfly – he needs a number of aliases. He’s a hitman.
But after a close call in Swedish winter wilderness, in which he ends up killing both a gunman who’d come to kill him and his girlfriend who may or may not have helped him, Jack is having second thoughts about his career.
The next job he’s offered by his handler is just to custom-build a rifle for someone else to use in an assassination in central Italy. “You don’t even have to pull the trigger,” he’s assured.
He settles down in a beautiful hillside apartment and gets down to filing tubes of metal, trying to blend in with the locals under the guise of being a photographer, but such a striking American is always going to stand out in a traditional village like that.
Before long, his attention is divided between a prostitute in a local brothel and the equally stunning assassin who’s sent to test – and buy – his weapon.
All the while, the Swedes are after revenge.
And as he feels unwanted eyes on him, he starts to plan his next move – how can he get out of the village – how can he get out of this way of life – and how can he be sure who will help him and who will try to stop him?

Anton Corbijn’s follow-up to his highly-acclaimed feature 2007 debut is as stylish and stylised as you might expect.
The deliberate pacing drags you by the lapel and leads you confidently through a thoughtful and provocative tale, but one often seen in the movies – the (*fill in job title here) hitman who wants out but the world seems to be conspiring against him.
The photography is stunning and Clooney’s performance delivers the delightfully understated perfectionism seen in many of his more thoughtful roles.
Set in Italy, the number of astoundingly beautiful women does not feel unreal, but some of the other supporting characters seem stereotypical, pointless or under-used.
Based on Martin Booth’s novel, A Very Private Gentleman, the film struggles with the adaptation. There are characters who are set up to do very little, but presumably had a much larger role in the book. The film might have worked better if some of these had been more thoroughly explained, while others were left out altogether, but touching on them like these leaves rather too many questions hanging – but not the kind of important questions that satisfy cinema-goers.
Elements of the story are frustratingly contrived – in the opening sequence, the Swede could take a shot at him as his struggling through the middle of an empty wilderness in thick snow, but waits for him to be close enough to a rock where he can seek cover – and when a road accident comes out of nowhere and kills a mysterious outsider, no-one seems to bat an eyelid – least of all the one person who should really be changing his behaviour as a result.
How much of the cause of it being confusing and unconvincing is down to the original novel rather than the adaptation is unclear with only the film to go on, but regardless, for a film to be effective, it must work in its own right.
The film is beautiful and feels like a typical slow-burning European thriller, but it neither convinces nor grips like it should.
Sadly, like many Americans in this industry, it’s a little more style than substance.