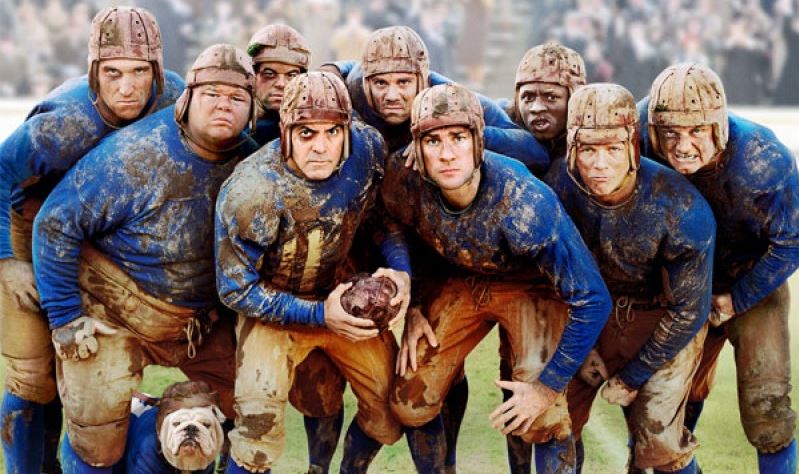 With what little money is left quickly draining from the professional game, Dodge comes up with a plan to save the Duluth Bulldogs – hire Carter.

Amid a blaze of publicity, the Bulldogs finally have a player they can rely on, but his slimey agent, CC (Jonathan Pryce) is already trying to find him a bigger club – with a bigger pay packet.

Enter ambitious local reporter Lexie (Renée Zellweger), on a mission to expose Carter’s great secret – that he’s not a true war hero after all, but CC is determined to keep his secret under wraps.

Against this backdrop, you probably wouldn’t be too surprised to hear that Dodge and Carter are soon competing against each other not just on the pitch – but off it – with the smooth oldie and naïve newcomer both vying for Lexie’s affections.

This is one of those sporting movies that doesn’t quite score, falling just short of the touch-line.

You really feel you want to like this film more than you do.

The key characters are likeable enough – there’s a loathsome bad guy in the shape of Pryce’s agent – and the issues including betrayal, scandal and love-rivals are every bit as topical now as they would have been back in the 1920s.

But somehow Clooney’s attempt at the classic screwball comedy falls flat – the gags are either too obvious or just not funny enough – the drama is weak, the twists slight, the supporting cast doing little more than filling the screen.

In his highest profile role since the American Office brought him to public attention, John Krasinski’s character here is little more than a blank canvas, giving him nothing to get his teeth into.

The film seems to be executed well enough for what it is, so its failings must be in its ingredients.

What could – and should – have been a warm-hearted, historical, satirical, sporting romantic comedy, comes out of the oven seeming like an inconsequential blend of familiar ideas.