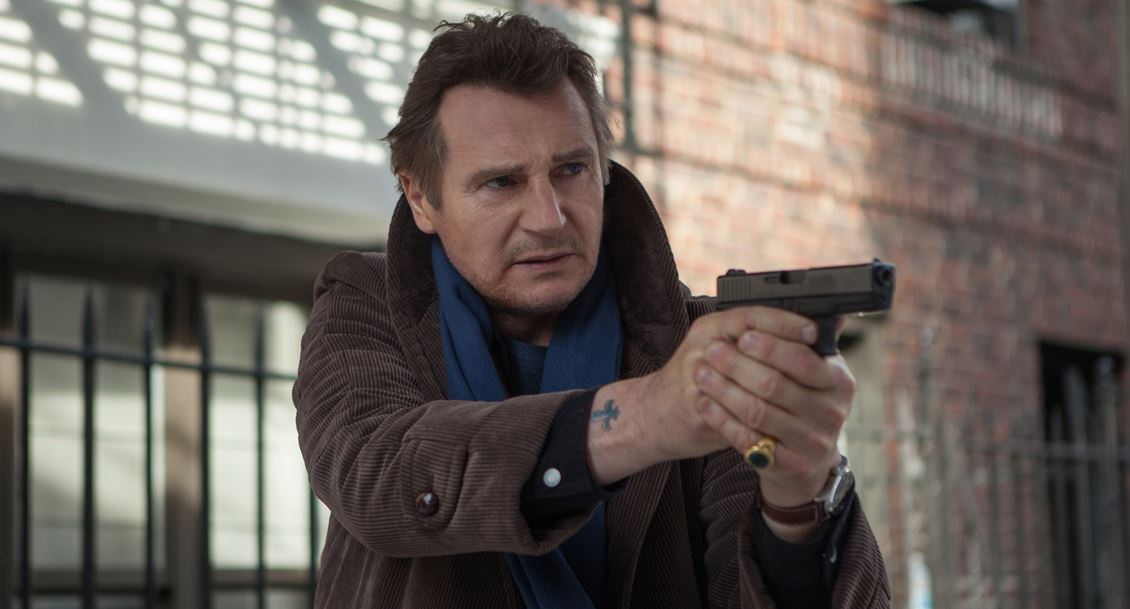 Scudder (Liam Neeson) used to be a Manhattan cop with a drink problem. After a bystander was wounded in a shoot-out, he quit the force and some years later, he’s got a new revolver and he’s working as a low-rent private detective.

When someone from his Alcoholics Anonymous group offers him a high paying job, he’s interested enough to find out what it’s all about. The man’s brother Kenny (Dan Stevens) wants him to find a gang who kidnapped and killed his wife.

Scudder would feel a little less conflicted about helping him out if it weren’t for the fact that Kenny is a violent and ruthless drugs trafficker.

Nevertheless, he takes the case and with the help of a precocious black street-kid, he sets out to discover who is behind a serious of brutal, misogynistic attacks so that he can administer his own brand of justice.

From the Taken films to Non-Stop (and compare the photos on the reviews!), Liam Neeson growls at the bad guys on his mobile while waggling a revolver around. In this 1990s-set thriller, mobiles are largely replaced by landlines, but the main difference here is that rather than those who need protecting being his daughter or the unsuspecting passengers on a commercial flight, he’s putting his life on the line to help several ruthless drug barons, each of whom would have no compunction about doing what’s been done to their womenfolk to those of their rivals.

Our hero’s lack of any personal connection to these evil people he’s helping – or indeed chasing – makes it hard for us to care about what he’s doing or why. And while the film has some stylish action sequences – not least the completely superfluous pre-title flashback – it’s bursting at the seams with cliches; a disillusioned ex-cop – with an alcohol problem – and a plucky black street-kid under his wing…

But feeling familiar and there being no-emotional hook, the most criminal thing for a crime film, it’s simply not that clever – leads are uncovered too easily, red herrings are too obvious – so it fails to grip the heart or the head.