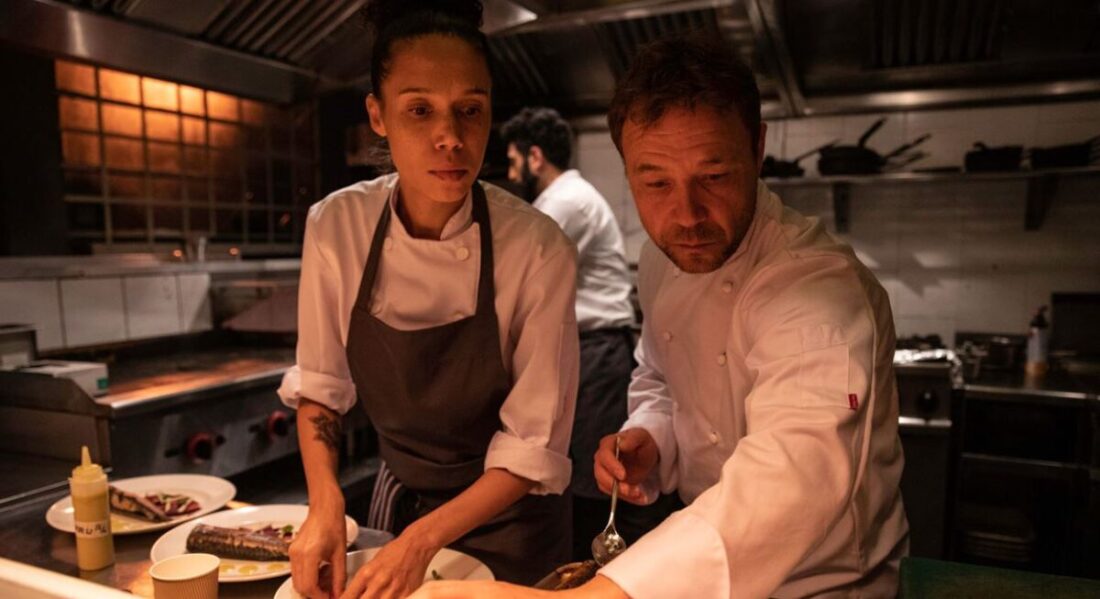 Andy Jones (Stephen Graham) is having a tough time. He’s recently separated from his wife and is finding it hard to keep in touch with his young son.

He’s a part-owner and head chef at an exclusive London restaurant whose star is fading somewhat, as he’s too stressed to give it his full attention.

On one fateful night, a combination of events – from a visit from the local environmental health department, to late employees, lazy staff, arguing colleagues, pompous diners, a food allergy and the unexpected visit of an estranged friend and TV chef Alastair Skye (Jason Flemyng) and his restaurant critic friend – push him to his limits.

At its heart, this is a drama about a man on the edge – a chef on a knife-edge, perhaps. Can he hold himself together and keep his balance – or will life get the better of him and see him fall off his perch?

Stephen Graham and Vinette Robinson as his number two in the kitchen are outstanding as they conduct the staff around them like members of an orchestra – each one playing their own part in making the symphony of supper.

There are so many people working in the restaurant, we don’t really get to know too many of the others particularly well, despite teasing some potentially interesting back-stories.

The pressure under which they’re working doesn’t present an appetising portrayal of a life in a restaurant kitchen – it won’t attract anyone but masochists to the profession.

The well-worn phrase “If you can’t stand the heat, get out of the kitchen” certainly applies here.

Similarly, in a restaurant bursting with colourful customers, we get to know only a handful, including a bunch of arrogant social media influencers and a self-important diner who thinks that buying the most expensive wine on the menu entitles him to be abusive to the waiters.

Jason Flemyng also shines in a relaxed performance, as a celebrity chef whose history with Andy has clearly had as many ups and downs as a potato masher.

All in all, stress is oozing from Andy’s pores like steam out of a saucepan as it approaches Boiling Point, but can he keep a lid on it?

In the moment, the drama itself is often riveting and heart-pounding, but take a step back and it feels a little pedestrian – depressed man has a bad night and ends up even more depressed. There are too many sign-posts teeing up the obstacles he’s going to struggle with  and what teases with some sweet moments ends up leaving a sour taste in your mouth.

I didn’t feel emotionally enriched by the story and while I learned a lot about the culinary world, I didn’t feel like I’d learned much about the world outside the restaurant.

Perhaps the element of the film most discussed is something that might pass over the heads of people who don’t appreciate the complexity of the art of film-making itself; Boiling Point joins the canon of feature-length films shot – or purported to be shot – in one take, such as the recent German drama Victoria – and the the war film 1917 and the theatre-set entertainment satire of Birdman, which cheat just a little.

The director Philip Barantini – who once worked in a restaurant kitchen himself – throws out the film-making rule-book and uses his third take out of four to bring added authenticity – and claustrophobia – to the kitchen, as the camera follows the characters around for an hour and a half – almost entirely in close-up or mid-shot.

One of the problems of telling such a story in real-time is that squeezing an entire narrative into such a short period of the protagonists’ lives can feel a little contrived and makes the character arcs less convincing – sometimes rushed or condensed, sometimes inevitably unexplored.

When so much of the talk about a film is reduced to one element – its single take – you can be forgiven for concluding that there’s not that much else to talk about. If a story is worth telling, is it worth holding that story hostage to the storytelling technique? What would be wrong with a cut that doesn’t involve a kitchen prop-knife?

It’s a visceral experience – but more of an intellectual than an emotional journey – and gripping and commanding as Graham is, it’s an exercise that leaves you wanting to spend more time with some of the supporting characters than with the man at its core.

I’ve said this about other films but the analogy applies more appropriately here; the tasty ingredients don’t quite make for a meal as tasty as  you might hope. And perhaps because of the one-take cinematography, for a film set almost entirely inside a high-class restaurant, we see lots of cooking and waiting tables but very little appetising food.