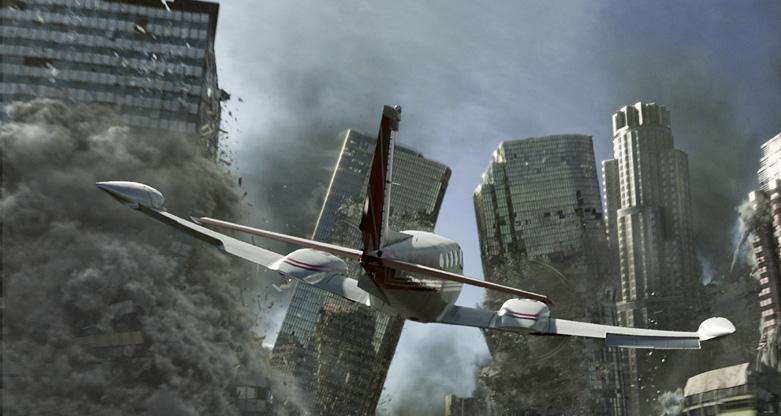 Lowly US government scientist Adrian Helmsley (Chiwetel Ejiofor) discovers that flares from the sun are causing the Earth’s core to heat up.
He manages to persuade cabinet minister Carl Anheuser (Oliver Platt) that it’s only a matter of time before the Earth’s crust crumbles – sending waves of earthquakes and tsunamis across the globe, swallowing up civilisation as we know it.
World governments club together to come up with a plan to save enough people to preserve the human race and give mankind a future.
This involves charging the rich and powerful millions of pounds to book a place on a number of modern-day equivalents of Noah’s Ark.
Against this background, failed author – and failed husband – Jackson Curtis (John Cusack) is taking his children on a rare camping trip when the world opens up beneath their feet.
They dash back to pick up Mum (Amanda Peet) and her new boyfriend Gordon (Tom McCarthy) and lead them to safety. But nowhere is safe from a crumbling crust – even more devastating than the alien invasion of Emmerich’s Independence Day or the global warming of his The Day After Tomorrow – unless this everyman can hook up with his betters.

What has Roland Emmerich got against this planet? He seems determined to destroy it over and over again.
Perhaps the most remarkable thing about this film is that he can still come up with new ways to do it that still feel fresh.
So if you’re happy just to sit back and enjoy the spectacle, this could be fun for you, but if you prefer to exercise your brain when you go to the cinema, treat this like a crack that opens up in the ground beneath your feet – run in the opposite direction – very fast.
There is, of course, much very fast running in this film, as our hero loser Jackson runs down a crumbling runway to clamber onto a plane that’s speeding along, about to take off – that’s right – he catches up with an aeroplane on foot. That gives you a sense of the kind of action you’re going to get.
And of course, Washington conveniently gets destroyed last – what use would it be if the President were wiped out before he and his cronies could witness the devastation.
Expect all the usual characters – the loser who redeems himself with his estranged family, lowly civil servant who ends up with president’s daughter, the cantankerous fat billionaire and his bimbo second wife, the man who’s called upon to fly a cargo plane after two lessons in a twin-prop, the crazy paranoid soothsayer who’s dismissed by everyone who hears his prophecies, the conniving politician who gets his comeuppance – every archetype and cliché in the book combine with the illogical incoherencies that are required by the genre to carry this marathon of a film to its inevitable conclusion.
After about ten minutes of flipping between all the characters, as we were blasted with some nonsensical science, Emmerich just winds the lever and lets the film meander from one thrilling action scene to another, while skimming over much of the potential personal drama.
And what kind of moral message is being sent out when the audience is rooting for our heroic loser to break up the relationship of his ex-wife and the loving and devoted partner who is very much seen as a new father to their children.
It’s all utter nonsense – but mostly unpretentious, warm-hearted and largely enjoyable nonsense. And some sly nods to real-life characters and events will raise an additional smile.
The film is predicated on an apparent Mayan prediction that the world will end in 2012. It’s been a long wait to find out whether they’ll be right – and this film is so long, if it doesn’t win you over, you’ll probably wish the world had ended about midway through.