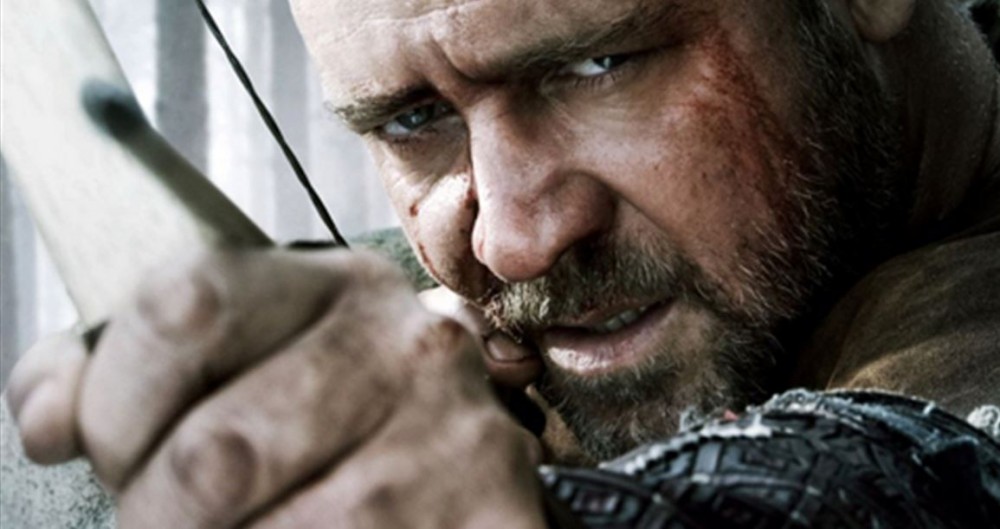 In 1199, on his return from one of his crusades, Richard the Lionheart (Danny Huston) is slain. One of his archers in the battle, Robin Longstride (Russell Crowe), sees this as an opportunity to desert the army and flees into the French forests with his band of not so merry men, including Little John (Kevin Durand) and Will Scarlet (Scott Grimes).

In the forest, they stumble across the King’s trusty sidekick Sir Robert Loxley, who’s been caught in an ambush, led by English nobleman Godfrey (Mark Strong), who’s an agent for King Philip of France.

Robin and his men disperse Godfrey and his gang and posing as Sir Robert and his men, they make it back to England, where they break the news of King Richard’s death.

The selfish and ambitious Prince John (Oscar Isaac) succeeds to the throne and starts throwing his weight around, replacing his brother’s most trusted advisor, William Marshall (William Hurt) with Godfrey and sending henchmen far and wide across the country to collect taxes from people who cannot afford to pay.

Having broken the news of the King’s death, Robin – still posing as Sir Robert – searches out the Loxley estate to tell his family that he too has died. Sir Robert’s father, Sir Walter (Max von Sydow) and his widow Marion (Cate Blanchett) allow him to stay for a while, which turns out to be useful, since the king’s men soon turn up to collect their taxes.

Marshall discovers that Godfrey is plotting to turn England’s northern noblemen against the Crown to create a civil war, to occupy the King’s forces while France mounts an invasion from the south.

It takes some persuasion, but Marshall eventually convinces King John that his crown is under threat from the French, because of Godfrey’s betrayal, and Robin and his men are enlisted to help fend off the foreign advances.

Robin’s success in protecting the sovereignty of the British crown isn’t greeted with the congratulations one might have expected for such an heroic act.
The legend of Robin Hood, the outlaw, is born.

This is an odd blend of rewritten history with unproven legend. Some people are complaining that it’s historically inaccurate – previously, the suggestion has been that Robin became an outlaw while King Richard was fighting abroad. But it seems odd to challenge the events of a film about an outlaw who exists only in medieval ballads and not the history books.

This film creates a new history – of how the archer Robin Longstride rose from being a minion in the King’s army to a saviour of the nation, before being summarily reduced to the outlaw of legend. But Sir Ridley’s film stops at this point, so there’s no robbing from the rich to give to the poor in sight. That, it seems, could be saved for a sequel.

What we do see, though, are signs of Robin’s morals – he rises up against authority and tries to persuade King John to sign up charter giving greater rights to his subjects and he fights to stop the Church stealing grain from the Loxley estate and the dozens of people whose livelihoods depend on it.

If you forget that some of the character names in this film are familiar, the plot ceases to be bound to historical events and it then becomes a riveting romp through months of national political intrigue, the reign of a desperately insecure monarch, the duplicity of his chief advisor who’s betraying him to his nemesis across the Channel – it’s chest thumping, bow flinging fun.

As the intricate but largely believable plot unfolds, each set piece becomes grander as Sir Ridley flexes Russell Crowe’s muscles, as he did in Gladiator.

Rousing military scenes – culminating in what can be described only as Saving Private Ryan with bow-and-arrows – drive the story forward with blood curdling vitality.

The film comes dangerously close to being let down by a handful of corny Hollywood conveniences and wandering accents (although who really knows how they spoke in Nottingham, eight hundred years ago?!), but they’re mostly excusable, because the movie is just so tremendously entertaining. The film is deliciously big and feels nothing like its nearly two and a half hour duration.

All the key players – from Sir Ridley and Crowe to Cate Blanchett and baddy-de-nos-jours Mark Strong are near the top of their game – and veterans Max von Sydow and Eileen Atkins (as the Kings’ mother) are also impressive. But many of the other characters familiar from previous tellings of Robin Hood’s life – such as Friar Tuck (Mark Addy) and the Sheriff of Nottingham (Matthew MacFadyen) are sadly underused, to the extent that a sequel feels all the more inevitable.