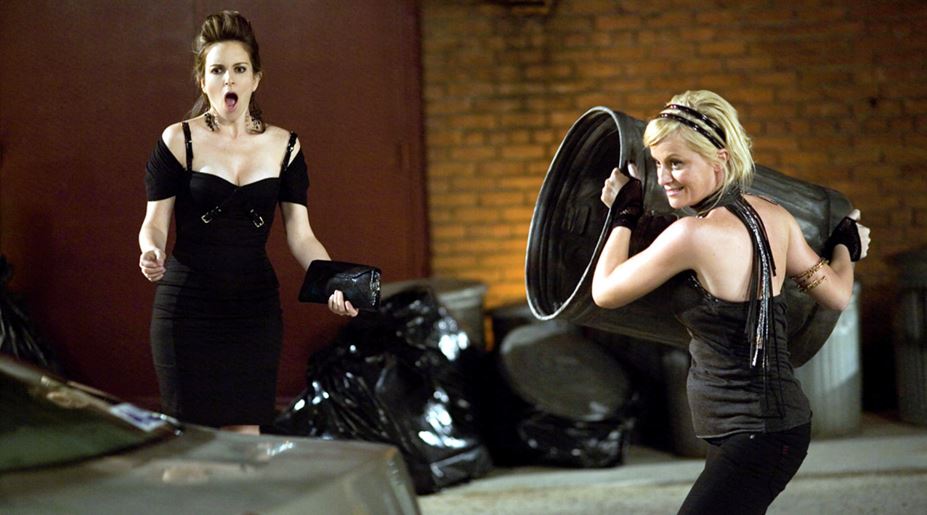 When she realises that by being the youngest woman in the boardroom, she’ll end up the oldest woman outside the schoolgates, supermarket executive Kate (Tina Fey) realises it’s time to have a baby.

But for a single, 37 year old, high-flying business-woman, with no time for a relationship, and a problem uterus, this isn’t at all straight-forward.

She concludes that surrogacy is the way to go and signs up to an agency run by the statuesque Chaffee (Sigourney Weaver).

Perhaps oddly for an agency that’s as expensive as it is exclusive, Kate is assigned a selfish, gum-chewing ignoramus Angie (Amy Poehler), with a boyfriend Carl (Dax Shepard) who’s just about as slimy as they come.

Things in Kate’s life really come to a head when she’s trying to nurse Angie through her pregnancy at the same time as gestating a new supermarket development for Steve Martin’s oddly over-the-top but underplayed hippy of a business boss, which involves obliterating the fruit-juice business of the honorable, if wet local cutey, Rob (Greg Kinnear).

Anyone familiar with Tina Fey from her 30 Rock will appreciate her breezy wit and charming blend of self-confidence and self-deprecation.

But the key relationship in the film – between Fey and Amy Poehler – reunites the pair from their Saturday Night Live days – something most British audiences will never have seen, so it’s wasted on us.

Instead, once we’ve got over the unlikeliness of Poehler’s chav being assigned to Fey, it’s little more than a light and fluffy odd-couple comedy.

The basic premise of the film is simple enough and, if a little far fetched, delivers what it promises – and nothing else. Almost without exception, the gags grow out of stereotypes.

It’s not as big or clever as you might expect or hope from Fey, but it’s a charming enough way for girls to spend the two hours that the boys are watching Batman.