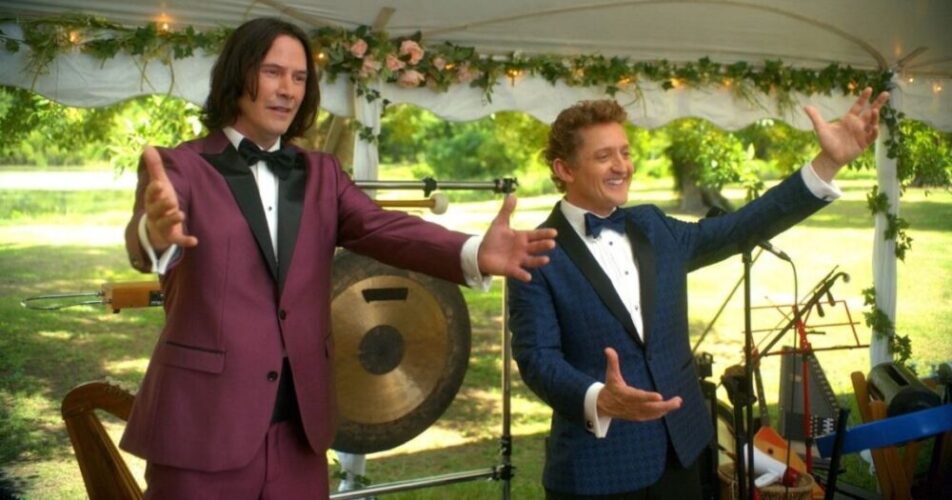 It’s been nearly thirty years since we last met talentless metal-head slackers Bill (Alex Winter) and Ted (Keanu Reeves), who – against the odds – would, to all intents and purposes, be deified, hundreds of years later.

When we first joined them on their “excellent adventure,” they travelled through time in a phone-booth and collected figures from history to help them with a school project that they had to pass to avoid being expelled.

Three decades later and the stakes are a little higher…

After fifteen minutes of fame, their star has waned and you’re more likely to see them entertaining at weddings than in stadiums. On the personal front, they both find themselves in couples’ therapy and it’s only their teenaged daughters, Billie (Brigette Lundy-Paine) and Thea (Samara Weaving) who seem to have any faith in them at all.

It’s not just in modern-day San Dimas that people have lost interest in them; seven hundred years into the future, too, their followers are giving up on them.

A new-look time-travel machine takes them to the future, where they’re told that they have less than an hour and a half – the length of the film – to write a song that will unite the world throughout time; failure to succeed will mean the end of Planet Earth as we know it.

In the late 1980s and early 1990s, Bill and Ted were the voices of a generation – a dispossessed youth, searching for meaning in the world around them – and that meaning came from rock music – and being excellent to each other.

They spawned catch-phrases and gave a whole new audience to the 70s glam-rock stars of Kiss.

Travelling through time and befriending Death himself (William Sadler), their naivety and humility helped to make slackers – and history – cool.

But perhaps more than any other sequel of its kind, coming three decades after the original films, you have to ask “Why?”

Bill and Ted are no longer dispossessed youth but middle-aged fathers – living in apparent comfort in suburbia. The only conflict in their everyday life appears to be trouble in their marriages, but that’s evident only because they’re in counselling – there’s no indication that there’s anything wrong in their marriage until they start travelling around time again, chatting to themselves – their single selves – at different points in their future.

So as well as trying to save the world, they’re also trying to save their marriages, it seems. But all the way, their daughters seem to be on Team Bill & Ted, on their own excellent adventure through history to try to help their Dad’s record a song that will resonate through the future like the Bible through the past.

Having built a hugely successful on-screen career in the meantime, with franchises such as The Matrix and John Wick, Keanu Reeves fits less comfortably back into Ted’s skin, but Alex Winter’s return to the role of Bill feels more natural.

Many of the recurring gags don’t work as well with middle-aged men as they did with teenagers – Winter and Reeves often feel like they’re just too old for their characters. They’re more entertaining  as they have fun as their various possible-future selves. Luckily, much of the Bill & Ted humour emerges vicariously through their daughters, but fans of the original film might balk at the idea of being given a film which – in many senses – is more about Billie & Thea, although it’s fun to watch Samara Weaving as she shuffles around, like she has something up her backside, mimicking the shuffling gait of her screen Dad.

This is not a film about the narrative – it’s obviously nonsense, riddled with time-travelling inconsistencies. It feels nostalgic – with the return of the familiar phone-booth, but some updated special effects give it a more modern feel.

But travelling around time, collecting famous people from the past and bumping into future versions of the main characters makes it all feel a little pointless.

Even the atmosphere lacks the excitement of the earlier films, when you never really quite knew what to expect.

Bill and Ted Face the Music is fun, if you’re already on board. But in truth, it’s a little anticlimactic – more of a bogus journey than an excellent adventure, if you like. And anyone who hasn’t seen the pair’s earlier outing could probably do with hopping in a time machine themselves to find out what’s going on, as this will mean almost nothing out of context.

And even for those familiar with their original films, a more excellent adventure would be had by jumping in a phone-booth remembering the fun you had watching the teenaged Bill & Ted as a teenager.