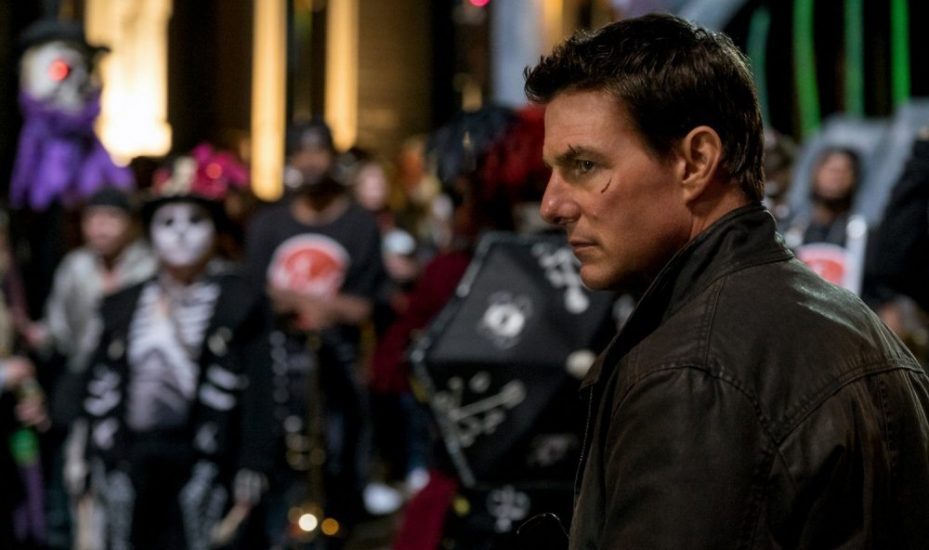 When former Military Police Major Jack Reacher (Tom Cruise) returns to his old army base for a meeting with his replacement, Susan Turner (Cobie Smulders), he discovers that she’s been arrested.

She’s implicated in the deaths of two of her own MPs, during the inspection of a convoy in Iraq.

Soon after Reacher tries to meet her lawyer, Colonel Moorcroft (Robert Catrini), to find out whether he can help her, the Colonel is found dead and all fingers are pointing at Reacher.

He believes that a private military contractor is stealing American weapons, selling them on the black market, killing anyone who might expose their operation and pinning those murders on him.

A Tom Cruise Production, it says at the beginning. Then, the top-billed cast member after Tom Cruise himself is one Cobie Smulders. “Who?” many might ask. She’s the one in the poster. Looking in the other direction, just in case anyone recognises her and takes any attention away from Cruise.

“Vanity project?” many might ask. Not that this should necessarily detract from the film. Vanity projects can work, but invariably, they’re vanity projects for a reason – either no-one with any self-respect wants to be involved or there’s one person so powerful that he won’t hear “no” from anyone.

Cruise himself displays his typically magnetic screen presence and Edward Zwick’s direction allows for some neatly choreographed action sequences – in cars, on rooftops, in jail cells, in dock-side warehouses – but the plot, the script and the plethora of rent-an-extra supporting characters leave a lot to be desired.

The time-frame of what’s supposedly happening doesn’t work, with far too much having happened in far too little time, while such a small number of people involved in the conspiracy make it almost inconceivable that they could have got as far as they did. There’s also an inconsistency between whether the chief conspirator is meant to be official military or a freelancer.

Two of the main characters are women, which would normally be seen as striking a blow for diversity – but with Reacher treating Major Turner like a babysitter, when he’s not flirting with her Donald Trump-style, there’s a chauvinistic streak running through this, and a teenager who might – or might not – be Reacher’s estranged daughter adds an irritating and unbelievable strand to the plot, not least by alternating between being particularly insightful and particularly naive.

Then there’s the peculiarly small-scale nature of much of what’s going on – in hotel rooms, dark apartments, offices, cars – making it feel a little claustrophobic for what presents itself as a large-scale action thriller. And a New Orleans parade, peopled with a peculiarly small number of revellers, seems to loiter outside a hotel where Reacher is staying as long as the plot requires, rather than actually parade; Zwick should’ve rewatched the opening scene of SPECTRE.

Tom Cruise did a creditable job of bringing Jack Reacher to the screen in the first film of this series, surrounding by an impressive array of co-stars – including Rosamund Pike, Richard Jenkins and David Oyelowo – which makes this follow-up all the more disappointing for its blinkered incoherence.

If you don’t think about anything – if you don’t care what any of the characters do or say – you could see it as a moderately entertaining actioner, but this kind of complacent thriller-by-numbers simply doesn’t stand up in a field of far stronger, more coherent and emotionally satisfying films.

My advice to Tom Cruise if the producers (oh, that’s him!) ask him to make another Jack Reacher film? Never go back.