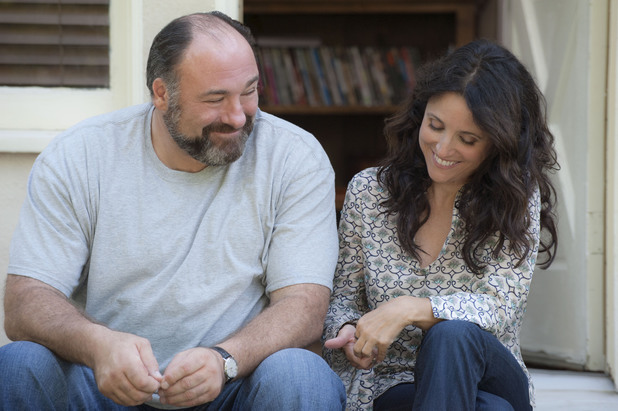 Divorced and single mother Eve (Julia Louis-Dreyfus) is spending as much time as she can between her massage clients with her teenaged daughter Ellen (Tracey Fairaway), who’s about to leave home to go to university.

At a party, she unexpectedly makes two new friends; Marianne (Catherine Keener) is a bitterly divorced single mum in need of a good massage and Albert (James Gandolfini) is an archivist at a local museum – also a divorced parent.

Marianne starts off as a client, but soon becomes a friend and confidante, as the pair exchange stories about their awful ex husbands and discuss their fears about losing their daughters to university.

Meanwhile, Eve surprises herself at how she finds herself falling for Albert’s genuine charm, given that he’s not physically the kind of guy who’d have attracted a younger Eve.

But as Eve’s relationships with her new boyfriend and her new friend both continue to blossom, she discovers something that could jeopardise both; she’s too scared to risk confronting the truth, in case both of her friendships collapse.

But how long can she keep up the charade?

Films such as Please Give, Walking & Talking and Lovely & Amazing have set Nicole Holofcener up as a writer-director of women, for women, who doesn’t alienate men. That’s a rare gift, to be able to target a film at a neglected female audience, without putting off the men they might like to join them in the cinema. With Enough Said, she’s gone a step further and produced the perfect date movie.

While the big twist is more obvious than an elephant in the room, the way it unfolds is deftly handled and every loose end ties together perfectly. What’s most clever about the way Holofcener does this is that it never feels contrived, despite the astonishing coincidences and near misses that occur with farcical regularity.

Part of the reason why she gets away with such narrative chutzpah is because her two key characters are so hugely likeable and empathetic that every female viewer will find herself drawn to Gandolfini’s ample frame while men around the world will be loosening the arm around their partner’s back, imagining for one moment that they’re sitting beside Louis-Dreyfuss.

The situations, while contrived, speak to moments that many people will recognise, examining relationships between friends, lovers, exes and parents with their children, with equal maturity, insight, depth, humour and pain. And while the film centres on Eve and Albert, the supporting characters – in particular the film’s teenagers – are similarly well drawn. There are a couple of less sympathetic characters, but they remain entertaining as they too drive the plot forward; one of them, Holofcener regular Catherine Keener, is the kind of first class bitch everyone wants on their side.

The saddest thing about this film is the “For Jim” credit as the picture fades to black, recognising it to be one of Gandolfini’s final appearances on screen. It’s notable that throughout this film, there are throwaway lines about how he should lose weight, and of course, just weeks before the film received its world premiere at the Toronto Film Festival, he suffered a brutally premature death from heart failure.

But the woman who gets men to like girl’s films managed to turn TV’s favourite gangster into a giant, lovable teddy bear. It’s a fitting way for him to say a bitter-sweet goodbye. Enough Said.