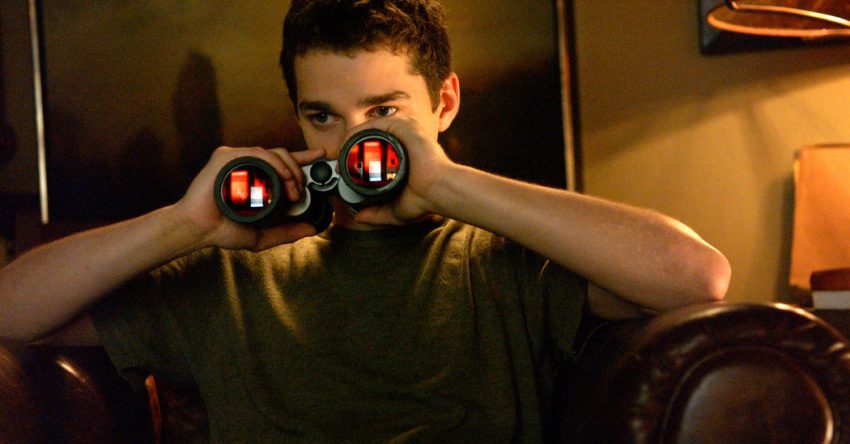 Kale (Shia LaBeouf) is a problem teenager. He’s still cut up about the road accident which killed his father, so when his teacher provokes him, he lashes out and ends up with a curfew, and an electronic tag around his ankle.

Bored, bored, bored. He roams around the house, watching TV and eating pop-corn until his exasperated mother cuts the power cable, leaving him with nothing to do except watch the neighbours from his window.

His neighbours include the new (very sexy, of course) girl next door, Ashley (Sarah Roemer), whose bikini-clad body looks even better through his binoculars.

Then there are the ASBO kids who lure him beyond his front garden, setting off his ankle alarm, bringing the weight of the law down on him.

And then there’s Mr Turner, who seems to spend most of his time mowing his lawn. What Kale finds most interesting about him, though, is that a dent on his car seems to match the description of the car used by the local serial killer.

Before long, his best mate Ronnie (Aaron Yoo) and the object of his desire, Ashley, are helping him stake-out Mr Turner, while their creepy neighbour tries to give as good as he gets.

Can Kale solve the mystery, without venturing further than his garden hedge – and without putting those he loves at risk?

The set-up of this film works nicely – the tragic car accident, Kale’s failure to control his emotions, the claustrophobia of the resulting tagged curfew.

Then it suddenly switches from a drama to a comedy for a few minutes, as we laugh at his slovenliness and learn that the way to tame a wild child is to let him watch a sexy girl do yoga from a distance.

Then it becomes a bit of a farce, with a girl who realises the violent convict next door is luridly spying on her reacting by knocking on the door and asking to be his friend.

Then the thriller kicks in – initially this is quite tense as the death-toll rises and the neighbour’s actions grow more and more suspicious.

But as the denouement approaches, the plot starts winding out of control, with coincidence building on contrived coincidence.

The film could have taken a more interesting, darker turn, but it ends up ticking all the teen thriller boxes for a nice, rounded, satisfying cinema experience.

The man of the moment Shia LaBeouf is fine, but he doesn’t really have any particular acting to do. Sarah Roemer is exactly the sort of woman every young guy wants next door – the stunner who’s flattered by your creepy attention, and the crazy best friend, again, falls into all the thriller clichés of being wild, wacky and mildly irritating.

David Morse is, of course, suitably creepy, but he’s so creepy that you can tell from the first moment you see his face exactly where the film is going.

It’s slick, at times exciting and funny, but ultimately, it’s A N Other formulaic and predictable teen thriller.