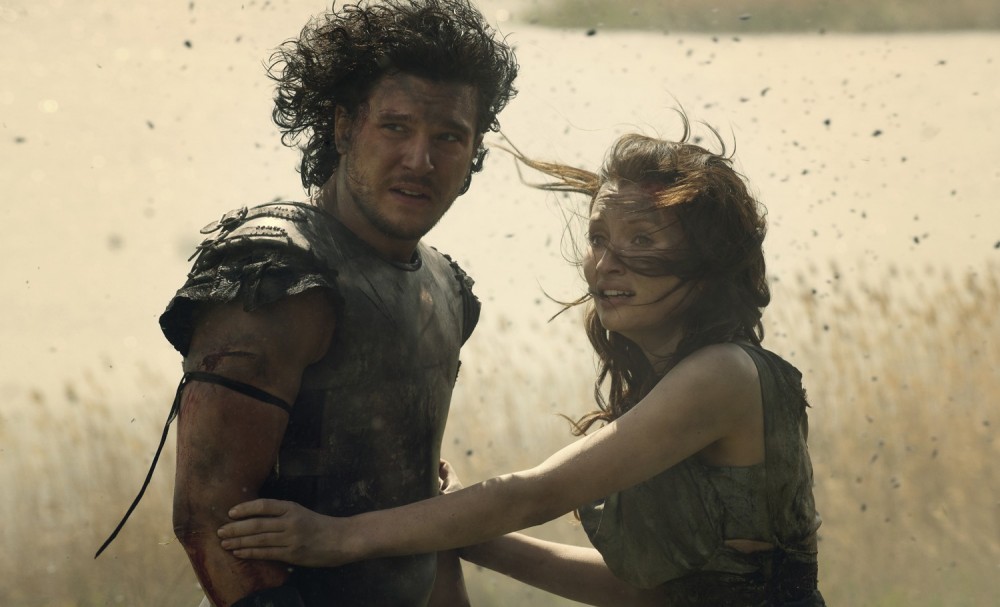 In Roman Britain, in AD62, a young celt Milo sees the ruthless centurion Corvus (Kiefer Sutherland) slaughter everyone in his village, including every last member of his family. He’s eventually captured, brought up as a slave and trained to be a gladiator.

Seventeen years later, excelling at combat, Milo (Kit Harington) is sent to Italy to fight with the best for the entertainment of the most influential leaders of the Roman Empire.

One such nobleman Severus (Jared Harris) is hoping to win favour with the new emperor and invites his emissary to Pompeii to see if they can do business together.

To complicate matters, the emissary, Corvus – now a highly influential senator – has designs on Cassia (Emily Browning), the daughter of Severus. But the aristocrat’s daughter has seen Milo in action and has fallen for the slave-cum-gladiator.

Milo, meanwhile, recognises Corvus and his entourage as the Romans who wiped out his childhood and sees his opportunity to get his revenge.

Oh. And the local volcano erupts.

I don’t know what is is, but something about the title made me think I was going to be watching a film about how a city was destroyed by a volcano, but it’s not until half an hour from the end of the film that we catch a glimpse of any lava.

So, for more than an hour, we’re watching a film about a gladiator trying to get revenge for the death of his family – Ridley Scott and Russell Crowe, anyone?

The fight choreography is balletic enough – slightly dumbed down to secure a 12A certificate – and the production design impressively recreates the ill-fated city at the foot of the iconic volcano.

But the story, set – Titanic-style – against the backdrop of an impending disaster, is derivative, predictable and thoroughly formulaic – a child who sees his family slain vows to avenge their deaths, a nobleman’s daughter falls for a slave – and apart from some scenery-chewing fun from Kiefer Sutherland, Jared Leto, the champion gladiator Adewale Akinnuoye-Agbaje and Joe Pingue’s gladiator wrangler, the acting ranges from local theatre group to TV soap opera; Kit Harington is no Crowe and beautiful china doll that she is, Emily Browning doesn’t have enough gravitas or screen presence.

The chemistry between the pair isn’t explosive enough to excite audiences until the eruption – the foreplay isn’t really worth the climax.

Once Vesivius erupts and fireballs start flying, Independence Day-like, at all the major buildings – and characters – in the city, the 3D comes into its own and you’ll find yourself ducking for your own safety.

Pompeii is a bit of a guilty pleasure, but before the disaster-movie kicks in, it’s a pale imitation of a variety of sword-and-sandals classics, a transfer of upstairs-downstairs drama to the Roman arena and a predictable, unoriginal and formulaic narrative and once the volcano starts to explode, it’s a somewhat over-the-top and incoherent romp.

It’s a long time to wait for not enough reward.