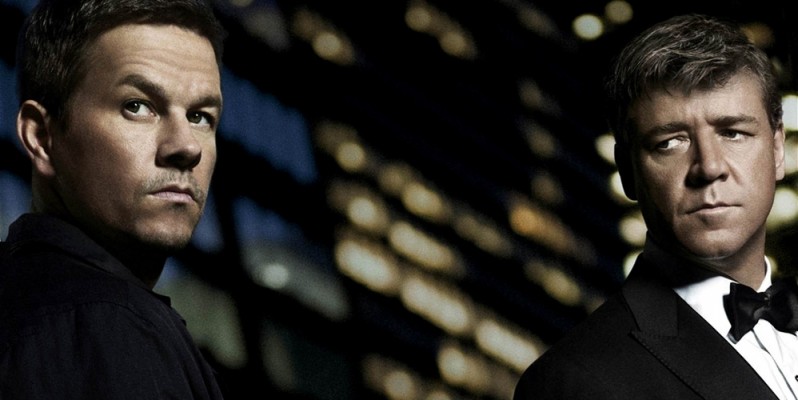 When New York City cop Billy (Mark Wahlberg) kills a suspect in the line of duty, some – including Mayor Hotetler (Russell Crowe) view him as a hero, but others, like boss (Jeffrey Wright) see him as a threat to the reputation of the police force, so he’s forced out.

He forges a new career as a private detective as he settles into his new life with his actress girlfriend (Natalie Martinez).

A surprise call from the Mayor draws Billy back into the heart of the action; the Mayor wants him to spy on his wife (Catherine Zeta-Jones), because he suspects her of cheating.

But as Billy digs deeper, he uncovers a web of deceit and corruption, feeding into the upcoming Mayoral election, in which a dubious Hostetler faces stiff competition from a squeaky clean challenger (Barry Pepper).

There are a lot of elements here for an effective thriller, but they’re clumsily heaped into the baking tin and stirred without enough thought – the ingredients are right but the recipe is not.

The plot swings to-and-fro, more to try to keep the audience on edge rather than for any true narrative purpose.

Much of the plot feels familiar – a disgraced cop working as a private detective, politicians with secrets, corruption and skull-duggery in the run-up to an election will all come as no surprise to anyone – and in his first directing outing without his brother, Allen Hughes does little to offer anything new.

The key performances fail to impress too – whether it’s that the characters don’t give the actors anything exciting to play with or whether they’re just not particularly interested in what they’re doing is a moot point, but Crowe and Wright are just trying to out-do each other in how deep they can talk and how butch they can talk – like dogs trying to pee the highest up a tree – while Wahlberg is mostly whining and Zeta-Jones just pouts and flirts with everyone except her husband, just as you’d expect from the closest this film gets to a femme fatale.

At its worst, the film tries to humanise its hero by showing that although, he’s a tough nut, he has a heart, getting angry with his girlfriend when he sees the first sex scene she acts in – but this sub-plot feels clumsy in itself and clunky in the way it’s tagged onto this neo noir.

It’s biggest crime, in the circumstances is that it just takes itself far too seriously, with almost no levity emerging from the underbelly of Manhattan.

Broken City is stylish and sparkles, but is a corny and cliché-ridden disappointment. It’s the typical mediocre star-filled fare that studios trot out early in the year, when awards ceremonies keep them out of the headlines, so they can put famous faces on posters, but disappear quickly without trace.