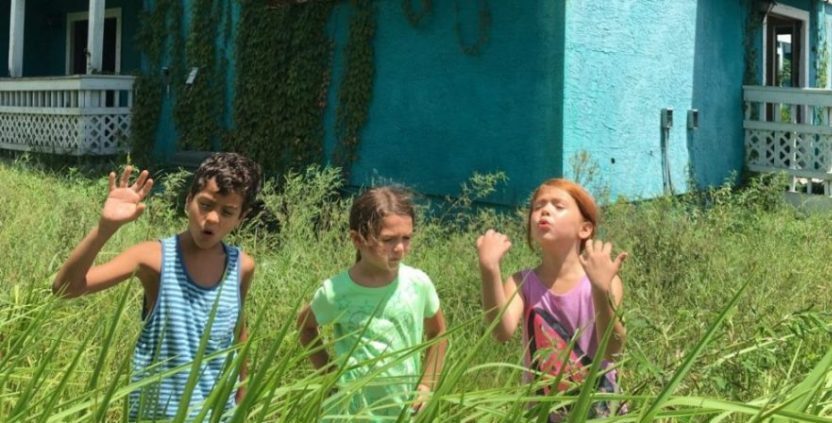 The Magic Castle seems to be an aptly named motel on the edge of Orlando, almost within sight of Disney World. But this is not a dream motel for wealthy tourists, but the kind of run-down establishment, inhabited by the poorest members of society, who can just about scrape together enough money for the next week’s rent.

Over the course of one summer, Moonee is hanging around with her friends, causing mischief, oblivious to the fact Halley is going to increasingly dubious lengths to pay rent to the motel manager Bobby (Willem Dafoe).

From the outset, The Florida Project appears to be little more than a slice-of-life over one summer, centred on a group of mildly delinquent, bored children, living at a motel that’s become home to a number of single-parent families, struggling – with varying degrees of success and integrity – to make ends meet. And perhaps the most exciting thing that ever happens at the motel is a reminder of how the other half live, every time a helicopter lands at the nearby Disney World.

But once you get the idea of the kind of people living there and the consequences of making your home in such an environment, this element starts to feel a little repetitive. This could, perhaps, be excused by the reality that the boredom of the youngsters and their parents’ difficulty getting by are similarly repetitive – but that doesn’t make for particularly engaging storytelling.

Yet the key performances – six year old Brooklynn Prince and her screen mother who’s not long out of her teens – are oddly appealing, given how badly behaved they are. In the case of the daughter, though, this is in cheeky, loveable rogue territory, but for the mother, it’s altogether darker, with boldness stretching through irresponsibility to criminality and sympathy rapidly waning.

And that’s where persistence pays off. Just when you’re thinking to yourself “OK, I’ve met them all now…and?” a powerful plot kicks in, almost out of nowhere, catching you somewhat off balance; the slice-of-life is replaced by brushes with the law – from the motel manager to the police and social services.

Suddenly, the film has a more focused direction, injecting new life into a vibrant drama that stops one step short of tragic, given that no-one dies.

While the discovery of new talent is always satisfying, rediscovering a familiar talent can be equally rewarding and seeing Willem Dafoe playing against type as the well-meaning motel manager is a delight. He’s so sympathetic and against his better judgement, supportive, that you almost wish he was your own landlord.

But try as he might, he can’t save Halley from herself, sending the film towards a fatalistic and realistic denouement.

For a film revolving around characters who find life as difficult as they do, seen largely through the fresh eyes of naive and exuberant young children, The Florida Project is surprisingly bright and upbeat, for much of the time, at least – until, that is, the plot kicks in and the narrative veers towards the adults. Even then, it retains a warmth as the film continues to be observational without being judgmental.

From the juvenile delinquency and the children’s point of view to the free-spirited final shot, the film has echoes of Truffaut’s Les 400 Coups.

Convincing turns from the kids, their parents and Dafoe himself make this study of Florida low-life unexpectedly watchable as writer-director Sean Baker and writer-producer Chris Bergoch show how much can be achieved with relatively few resources. And while the film is somewhat difficult to categorise, it’s no less effective for it.