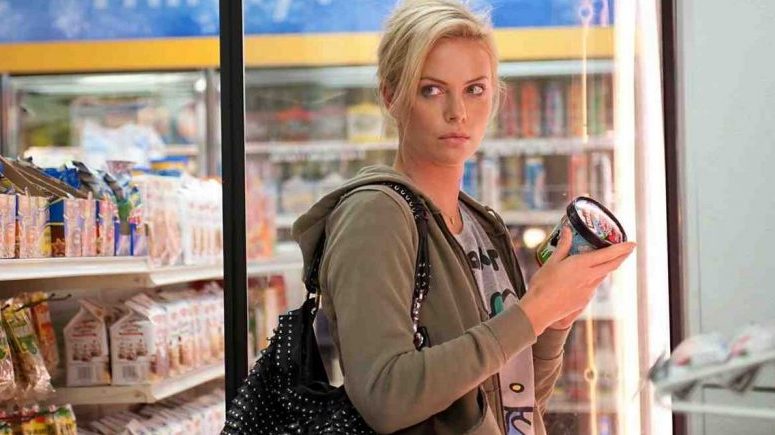 Mavis (Charlize Theron) writes romantic fiction for young women – at least she’s meant to; her series of books has been canceled and she’s having trouble coming up with the final volume.

She’s been living it up in the Mini Apple – as her Minnesota hometown folk call Minneapolis – but life is not as romantic as her novels and receiving an email saying that her high-school beau Buddy (Patrick Wilson) has just had baby with his perfect young bride Beth (Elizabeth Reaser), when her own love life is in pieces, shakes her up.

Everyone thinks she has the perfect life as a writer in the big city, but she just wants the small-town simplicity with Buddy that she’s long since given up.

Under the pretence of doing a property deal, she checks into a motel in Mercury, with her hand-bag sized dog in tow – her goal to win Buddy back.

Through encounters with figures from her past – from Matt (Patton Oswalt), the crippled fat guy she ignored at school, to her one true love (she believes) Buddy, his lovely wife Beth and her clique of bitchy young Mum friends and of course the parents – Mavis attempts to regain the life she once had, blinkered from the effects that her selfish determination is having on others.

She’s trying to restructure her life as she structures a novel – the outcast, misunderstood heroine, fighting against the odds to win back her man – but this is real life, not fiction, and Mavis is the only one who can’t see that her story cannot have the fairytale happy ending she craves.

From Diablo Cody and Jason Reitman, the writer-director team behind Juno, Young Adult is the kind of bitter and twisted small-town comic-drama you might expect.

Theron bristles – but as such a bitter loser, it would be wrong to say she shines – as she shamelessly digs deeper into the emotional despair that’s painfully pitiful to watch. It always makes a change to see one of Hollywood’s big stars dressing down and she has the role down to a tee – almost as if she’s experienced such doubts and confusion in her own life. Her character is an interesting protagonist, in that there’s no suggestion that the audience should even be rooting for this grotesque loser – we’re almost being invited to enjoy watching her humiliate herself.

Wilson pitches it right, as he’s initially friendly and polite but pulls back when Buddy realises that Mavis isn’t quite on everyone else’s wavelength.
The real hero of the piece is Beth, whose humility, maturity and stoicism portray the kind of life middle America might want to promote, brushing off everything that tries to get between her and her family – but with disarming charm.

Young Adult is a tale of an emotional breakdown – witnessing a midlife crisis is not an especially original concept for cinema these days – so many films seem to rely on the voyeuristic pleasure of intruding on other people’s pain.

This film is far from the ironic heights of Reitman’s previous works – such as Up In The Air and Thank You For Smoking – and it’s not as sharp as their previous collaboration, Juno – but the script bristles sharp one-liners that come out of nowhere and Reitman’s direction briskly takes you on an entertaining journey that can’t help but make you stop for a moment to consider whether you find yourself where you might have expected.