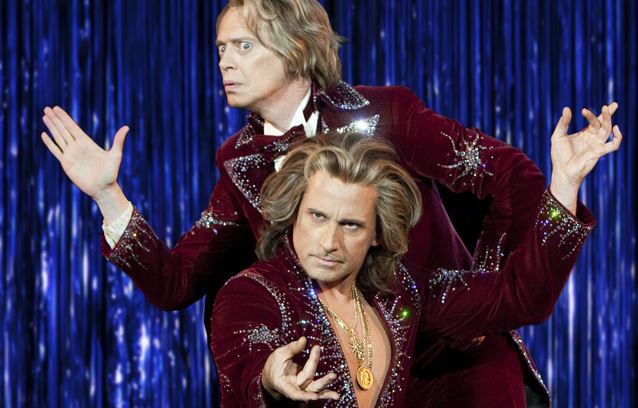 As a young boy, Burt was bullied by his classmates, who told him he’d never be popular – even his mother didn’t have time for him. His only friend was the sickly Anton. Their lives are changed forever when, one lonely birthday, Burt receives a magic set.

Years later, Burt (Steve Carell) and Anton (Steve Buscemi) have become global magic sensations, selling out one of the top venues in Las Vegas, night after night. But the sparkle is only skin deep and the magical friendship between Burt’s self-important womaniser and his hapless sidekick has long since been showing signs of strain off-stage.

The last nail in the coffin comes when their brand of grand David Copperfield-style illusions starts to lose favour with audiences, who prefer the edginess of the David Blaine or Dynamo-like stunts, from the street-to-stage entertainer Steve Gray (Jim Carrey).

With their act in tatters, Burt and Anton go their separate ways, as they seek to restore their reputations and steal back the limelight from the newboy on the block.

Magic in the movies is always a tough one. When you watch David Copperfield, or even David Blaine, you know that you are seeing what his audience is seeing – they fact that they gawp permits you to respond likewise. But when it’s in a movie, you know that they can cut and edit as required which, oddly, takes the magic out of the magic. It’s only a cameo by Copperfield and his end credit for a particular trick that suggest that there might actually be something impressive to behold.

The film is certainly in love with the old fashioned illusions and disdainful of the stunt-led entertainment preferred by many younger folk – and indeed most broadcasters, if the prevalence of Dynamo-like shows over the Paul Daniels Show is anything to go by; the bad guy – Steve Gray – rises to prominence through such “tricks” as not urinating for twelve days.

But while the tattooed stuntman is clearly the antagonist, the film-makers make it hard for us to root for the so-called hero; almost immediately that we see the bullied schoolboy and his geeky friend discover the magic of, well, magic, it’s revealed that Burt is a thoroughly unpleasant person – a self-important, ungrateful and thoroughly rude womaniser.

Steve Buscemi’s Anton, their assistant Jane (Olivia Wilde) and the magician who was Burt’s inspiration as a child (Alan Arkin) are the only truly likeable people for most of the movie, but they’re not in most of the movie.

There are plenty of funny moments, but they come largely from the comic talents of Steve Carell and Jim Carrey rather than from the script or direction.

Carell becomes likeable just in time to give viewers an empathetic protagonist, although he’s actually more entertaining when he’s a cantankerous misanthrope. And Carrey’s zaniness throughout grows tiring – it’s entertaining, but no progression from the wild-and-crazy performances that made his name nearly twenty years ago in films such as The Mask, Ace Ventura and Dumb & Dumber; he shows us that he’s managed to maintain an impressive physique despite reaching his half-century, but you get the impression that he was more entertaining for his co-stars than for viewers.

With a cast of this stature, The Incredible Burt Wonderstone underperforms – it’s not as funny as it should be, the plot is easier to predict than any trick and the film’s biggest crime is that it lacks the magic its premise promises.