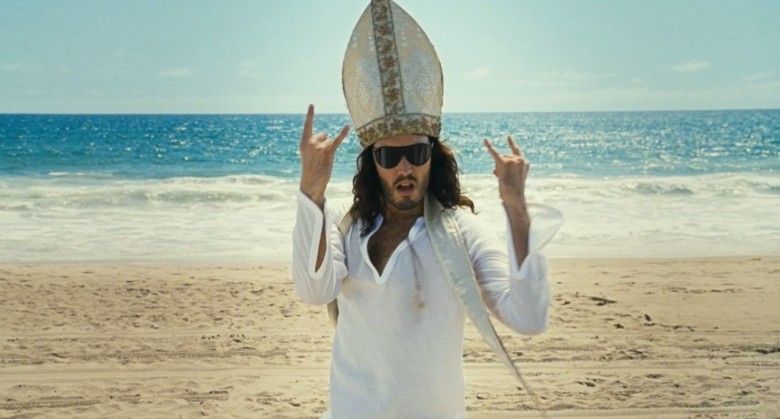 Sergio (Sean Combs) is worried about a downturn at his record company, so he asks his staff to come up with ideas to boost the label.

Sergio sends Aaron to London to escort the unhinged celebrity to Los Angeles, to – as the title suggests – get him to the Greek.

But while Aldous is up for the idea of reinvigorating his stalled career, like the rock-star he is, he insists on doing it on his own terms – at his own pace.

He’s in no hurry to catch the plane, being far more interested in flirting with young girls in night clubs, drinking, drug taking and proving to himself that he no longer needs his ex-girlfriend, Jackie Q (Rose Byrne), now far more successful than him – and dating Metallica’s Lars Ulrich.

Aldous Snow will be familiar to many viewers as the new beau of the eponymous character in last year’s Forgetting Sarah Marshall – also directed by Nicholas Stoller.

Returning to the role – but climbing up the credits – Russell Brand gets a chance to flesh out and explore his character in a way rarely seen in the cinema.
Jonah Hill takes on a different – but also larger role – as Aldous Snow’s hapless foil – the butt of his many physical and verbal jokes.

One of the key roles in Mad Men, Elizabeth Moss – as Aaron’s doctor girlfriend – seems to be shooting below her weight, but her modest performance gives gravitas to the role that it otherwise might not deserve.

The story is disappointingly, although necessarily linear – Aaron comes up with the idea of the gig, fliers to London, meets his musical hero, and inch by inch, nudges him first towards a plane and then towards Los Angeles, trouble-shooting like he’s never trouble-shot before, every step of the way.

Many of the situations are hilarious – although a handful are rather far fetched – but Hill and Brand work well off each other, and as he did with the same character in Forgetting Sarah Marshall, Brand comes across as a tremendously funny, humorously shallow, surprisingly profound, pompously self-important, unexpectedly vulnerable and inexplicably likeable celebrity jerk.

While there’ll be lines you’ll find yourself reciting for days after you’ve seen the film, it’s not as warm, clever or funny as its predecessor – partly because there seems to be less at stake for the buddy-relationship at its heart. In Forgetting Sarah Marshall, we were witnessing the break-down of a long-term relationship – in this case, it’s more a case of building up a power-unbalanced relationship from first principles. So the first film depended more on likeable characters, while this time, its often fairly crude and base humour and surreal situations that drive proceedings along.

It’s enjoyable, but not as insightful as it could have – or should have – been, rather two much of the humour was clumsy and obvious and it’s ultimately disappointingly formulaic.

But it doesn’t seem to be aiming too high – the film-makers are trying to have fun and share that fun with us – and on both counts, they largely succeed.