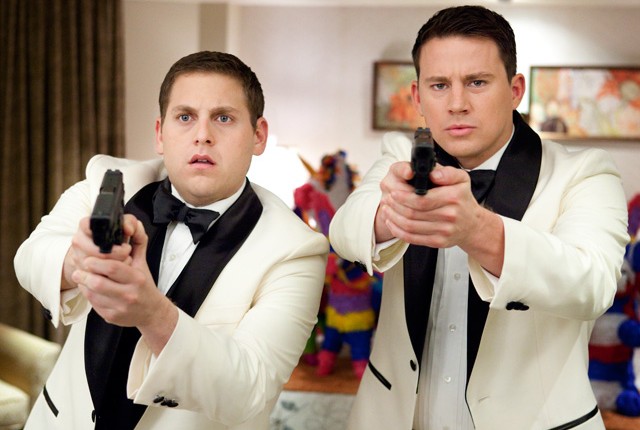 At high school, cool and popular jock Jenko (Channing Tatum) picks on overweight, geeky, brace-wearing Schmidt (Jonah Hill).
Years later, they turn up at the same police academy and surprise each other by becoming friends. All is forgiven, not least because they’re invaluable to each other in qualifying; Jenko helps Schmidt get fit and Schmidt helps Jenko cram for the academic tests.
On graduating, they become partners, but when their first arrest goes horribly wrong, their captain gets them off his books by assigning them to 21 Jump Street – a unit full of cops who look young enough to pose as teenagers to infiltrate drug gangs.
Sent back to school, this time Jenko finds himself socialising with the geeks, while Schmidt ends up hanging out with the cool, arty students, such as drama queen Molly (Brie Larson) and green campaigner Eric (Dave Franco…brother of James).
As their fellow 21 Jump Street officers bring in suspect after suspect, Jenko and Schmidt have a lot to live up to as they fight to regain their pride and bring down the king-pin supplying drugs to their class-mates.

If the film’s title sounds familiar, 21 Jump Street is a reimagining of the 1980s TV show of the same name that first introduced us to Johnny Depp. So, unsurprisingly perhaps, Depp turns up in a knowing cameo. It’s suitably fun and worth the wait, though.
But there are far too many knowing and clumsy in-jokes, such as the captain’s remark that the police department is following the trend of resurrecting things from the past by bringing back a programme from the 80s.
It’s also brimming, somewhat, with cliches – such as Ice Cube’s angry black captain (who even refers to himself as such) – and a range of other stereotypical supporting characters, not to mention the problem of having familiar names and faces in the cast who seem to have roles too small for their status – but of course, don’t.
Much of the comedy, if predictable, works – not least because Jonah Hill is a skilled comic actor and Channing Tatum works well, playing against type – and there is a nice exploration of school life as seen through the eyes of young adults, who’ve unexpectedly switched roles, but while it sets itself up as a comedy thriller, the thriller part fails to convince. The plot is completely unbelievable and contrived; are rookies really partnered up together? – can police officers who get thrown off a case just decide to carry on regardless?
It seems churlish to criticise the plot of a film that primarily sells itself as a comedy, but it has to work within its own world, and while it’s fun, this doesn’t.
It’s light-hearted, frothy and entertaining nonsense that doesn’t have any pretence to any gravity but is all the weaker for it.