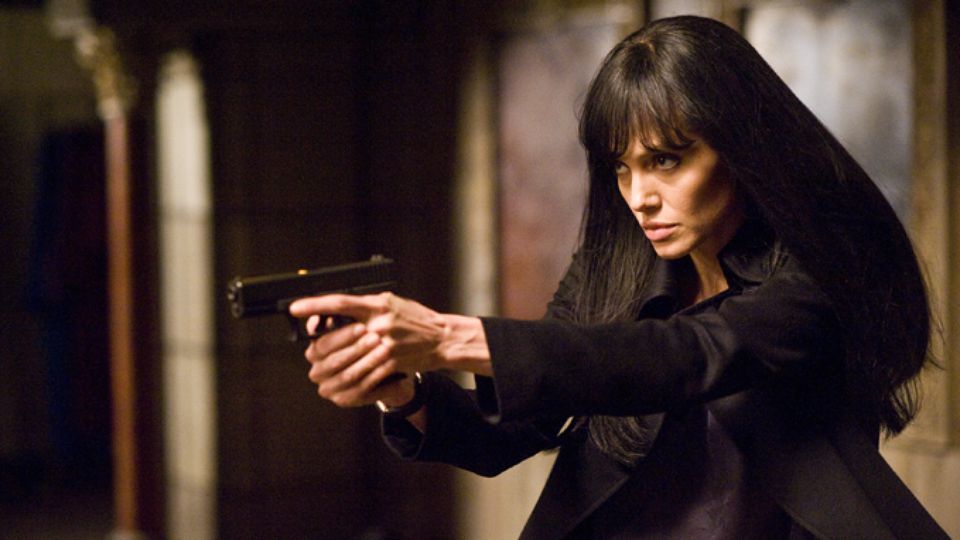 When first we meet American businesswoman Evelyn Salt (Angelina Jolie), she’s stripped to her underwear, being beaten to within an inch of death by North Korean soldiers. The believe she’s actually a US spy.

Through the lobbying of her husband, a German spider expert Mike (August Diehl), the CIA’s Ted Webster (Liev Schreiber) turns up to get her out through a prisoner exchange.

Of course it turns out that she is a US spy. And back home, real life resumes. Soon, she, Ted and Security Services officer Peabody (Chiwetel Ejiofor) find themselves quizzing Russian defector Vassily Orlov (Daniel Olbrychski), who discloses that there’s a plot to kill the visiting Russian Prime Minister, to try to provoke a nuclear war. The assassination is going to be carried out, he tells them, by a deep undercover Russian agent, called…pause for effect…Evelyn Salt.

Is she a Russian spy, or has she been set up? Either way, she can’t stick around to find out what anyone else thinks, so she has to escape the interview room, under the full-gaze of the tightest security in the world, sneak home to pick up some supplies and disappear – popping back into the limelight only to carry out a few of the most staggering stunts and contrived killings ever seen on the big screen.

The story goes that Evelyn Salt was original going to be played by Tom Cruise – with a different name, I’d imagine! He chose to do Knight & Day instead, presumably thinking he’s already done the action film about the hunter becoming the hunted (Minority Report) and fancied a bit of light-hearted nonsense, rather than a piece of nonsense that takes itself a little too seriously.

Flipping the main character from male to female gives us the chance to see a kick-ass Angelina Jolie destroying a dozen of the most highly trained presidential protection officers in the world, without smudging her lipstick, and jumping from the roof of one lorry, speeding on a freeway overpass, onto another, speeding in the opposite direction on a different level of the junction, all the while, donning disguises that throw the world’s greatest intelligence officers off the scent. It’s thrilling and heart-stopping, but so far removed from reality that it makes a bit of a mockery of any other attempt to ground the film in our world.

In that sense, too, it feels a little anachronistic – OK, so we have just had a handful of deep-cover Russians sent home from the US, giving this film an undeserved air of topicality, but in this post-Cold-War world, are the Russians really trying to provoke the Americans into launching the bomb – and reeling off some Islamic countries of targets doesn’t really make it feel much fresher.

There are a few moments where twists and turns feel so implausible that it feels as though they’ve been shoe-horned in simply to throw us off-course or to set it up for a sequel, as many of Salt’s own motives seem confused.

If you try not to take it too seriously, it’s an enjoyable sub-Bourne spy thriller – the main similarity being that in the same way that Matt Damon’s eponymous agent can’t remember anything about his past, when you leave the cinema, you won’t remember much about this.