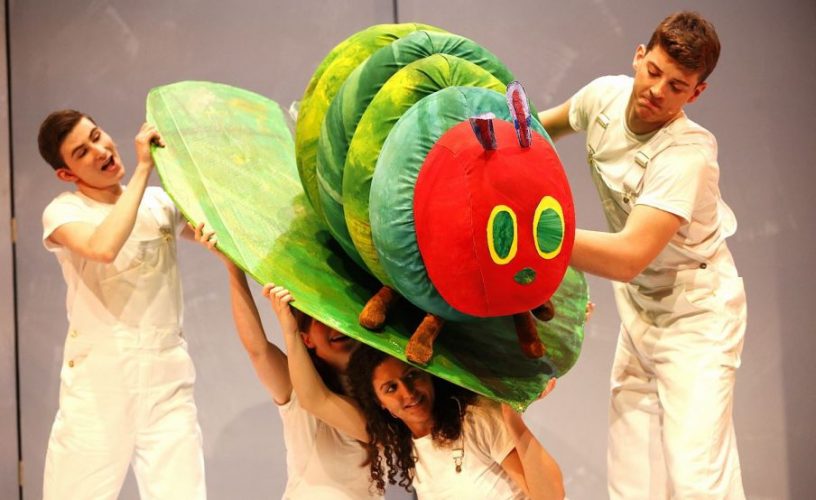 Three performers and more than seventy puppets bring four of Eric Carle’s children’s favourites to the stage in one show.

First, we meet The Artist Who Painted a Blue Horse – and a red crocodile and green lion, among others.

Then we learn about the gestation of a number of marine species in Mister Seahorse.

Next, we accompany the Very Lonely Firefly, as he looks for fellow fireflies to hang around with.

Finally, as the title of the show suggests, we spend a week with a Very Hungry Caterpillar, who just can’t eat enough, as he munches through fruit – and pretty much anything else he can find – on his way to becoming – I won’t spoil it for you, if you don’t already know!

There’s no doubting that the imaginative staging of this compendium is impressive – from a clever use of the stage, lighting and props to the elegant puppet-work, with animals from seahorses to elephants gloriously parading around in the bold colours that feel like they’ve jumped straight of the page of some of the most popular children’s books.

But unlike some of the other shows that been adapted from children’s favourites, rather than pad out the production with songs or additions to the script, the show’s creator Jonathan Rockefeller has filled the hour-long running time by combining a number of books and sticking more rigidly to the source material.

That would be fine, except that the source material isn’t particularly engaging on any textual level. There are no stories and the characters are archetypal animals, following nature’s inevitable path, rather than taking any kind of adventure or travelling on a particularly challenging journey. And the language itself is basic and lacks the rhyme or rhythm of many comparable shows. This, then, is more of a comment about the source material than the production.

The first of the books is the least engaging, with the production being little more than a painter painting things – but it’s this segment where the puppetry is the strongest and most elegant.

The next two have basic plots, but again, the puppets are skilfully brought to life to illustrate the pedestrian narratives.

It was only when the eponymous caterpillar arrived that the audience truly engaged with a plot that would have been more familiar to most and which provided opportunities for the kind of audience participation that allows children to become part of their own imagination.

It’s a treat for the eyes of all ages, but for anyone over older than five, the other senses will be less entertained.