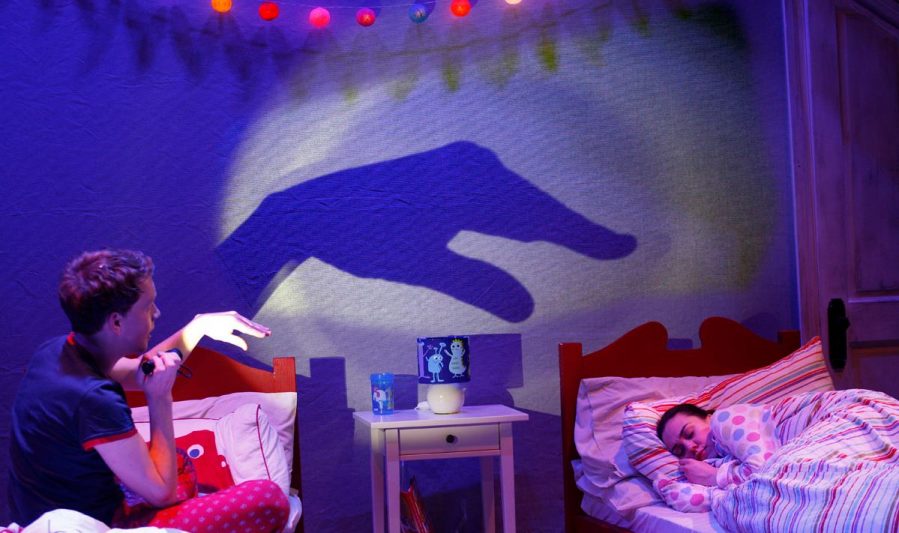 Stephen (Iain Ridley) and his older sister Bridget (Lorna Jinks) are having a sleepover at their grandmother’s house.

Stephen is too excited to sleep and wants to stay up and play. Desperate to sleep, Bridget offers to tell him a story if he promises to go straight to sleep afterwards.

But as she starts telling the tale of a little girl who ventures into the deep, dark woods with supplies for her poorly grandmother, the pair of them get more and more involved, as they excitedly act out one of our best-loved folk tales.

The Berry Theatre has come up with a highly imaginative telling of Little Red Riding Hood – a story famed for bringing together a little girl in a red-hooded cloak, her sickly grandmother and a big bad wolf who’s keen to eat them both. And that is perhaps its main weakness – it’s so imaginative that it’s all in the imagination of the two protagonists. Rather than seeing the fairy tale itself, we see two children acting out the story in their bedroom – so where we expect to see a little girl in a cloak, we see a little boy (played by a young man) in a cloak and in the place of a big bad wolf, is a little girl (played by a young woman) in a fur coat.

While you don’t get any big bad wolves jumping out at you, one thing that does jump out at you when you’re watching this play, in a theatre full of children whose years can be counted on one hand, is that such themes as eating children and chopping open a wolf with an axe don’t translate easily to the target audience, which then makes you wonder why stories such as this have become favourites of children so young.

With this in mind, you can see why the producers chose not to show their audience anything looking like an actual wolf terrorising children or grannies – and the idea of spraying blood, Tarantino-style around the stage, when the wolf meets its demise, would also have been far from their stage directions. But children familiar with the tale might feel cheated to come to the theatre and see a pair of adults, playing children, playing dress-up, with the only fights involving pillows and water pistols, rather than a woodcutter’s axe.

Between worrying about whether their own grandmother has woken up and how they can get some doughnuts from the kitchen without disturbing her, the story that people have come to see becomes fractured – almost lost completely – as you find yourself watching a play about a girl who’s originally trying to get her brother to sleep but then decides she’s hungry, so she needs to get some doughnuts. Where’s the threat in that?

There are clever attempts to tie the story we’re watching to the original fairy tale, but as an adult, I felt that I’d rather be watching the original folk tale than two children talking about it in language that occasionally nods to the source material. Children would be less likely to recognise these nods – and if they do, they might feel cheated that they don’t take them where they’d expect them to go.

Although the siblings occasionally venture through the wardrobe into their imaginary forest, the audience spends the whole show in the bedroom, which feels disappointingly claustrophobic for a play that’s set in – and either side of – a deep, dark wood.

Peppered with jolly song-and-dance routines, with bright costumes and a well-lit set, this Little Red Riding Hood lacks any of the threat that young children are able to handle. Part of the fun of taking children to the theatre is watching them boo the villain, but in this telling of the tale, there’s no villain to boo.

Ultimately, this show would be most suitable for children who are too young to understand fear and old enough to follow a non-linear story.

But there will be many parents who’ll want a threat-free song-and-dance spectacular with warm and friendly performances and cheeky, childish giggles aplenty. And even if the story they love feels like it needs to be freed from the wolf’s stomach with an axe, there are plenty of moments that will elicit belly laughs from children at the antics of Stephen and Bridget as they threaten each other with a water-pistol and a pair of pants.

There’s no question that Iain Ridley and Lorna Jinks make great children’s entertainers but this might have been better displayed by dressing up as a wolf or the eponymous little girl and casting knowing winks at the audience than by dancing around in children’s pyjamas, telling rather than showing.

It’s not really Little Red Riding Hood, but it’s no less fun for it.