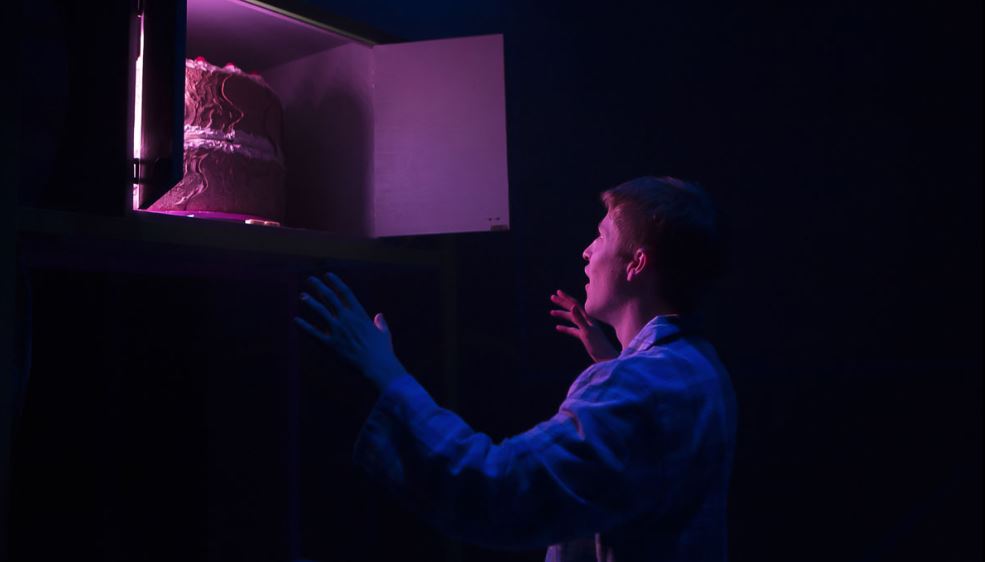 Like many young boys, Michael (Mark Houston) is obsessed with chocolate cake.

When he’s not scoffing his face with it, he dreams of the icing crumbling between his teeth as he chews the soft and velvety body of the cake.

So, when his mother makes a big chocolate cake, ready for his brother’s birthday party the following day, Michael finds it tough to resist the temptation of popping downstairs the night before for a sneaky taste.

With a now four year old, I’ve seen many of these musical stage adaptations of popular children’s books, from The Gruffalo and other Julia Donaldson favourites, to The Tiger Who Came to Tea and Michael Rosen’s We’re Going on a Bear Hunt.

It’s always interesting to see how they pad out a book that takes five or ten minutes to read to fill the best part of an hour on stage. Usually, it’s by adding a handful of songs.

But in the case of the unusually slight Chocolate Cake – a book with more promise than bite – there’s so little there in the original story that most of what appears on stage probably never even went anywhere near Michael Rosen’s mind, let alone ended up on the page.

That’s not to take anything away from the commendable efforts of Peter Glanville and Barb Jungr to bring this to the stage, but retaining the title and using Rosen’s name to promote it seems a little far-fetched.

Oddly, for such a brief book with so few words, you’d expect at least those to appear in the production, but much of Rosen’s playful use of language hasn’t even made the final script.

There are catchy tunes, imaginative staging and bright performances – although the use of adult actors to play young boys is somewhat off-putting, especially when the promotional posters feature a photograph of an uncontrollably excited youngster, rather than an image related to the book.

By adding a story – and characters – to what was, in effect, little more than a musing, you certainly get a sense of drama – even peril – which isn’t in the source material, but this doesn’t pay off at the end. It might be aimed at children from age four and up, but that doesn’t mean that they need to be patronised. Is it not likely that if you did what Michael does, you might expect some comeuppance? And that wouldn’t exclude the redemption required for the target audience.

It’s an entertaining enough hour or so, with a couple of songs that you’ll recall when they come around again but forget soon after you’ve left the theatre. And it strays further from the book than most similar adaptations, in so doing, detracting from some of the magic – of Rosen’s particular choices of words and my son’s particular choice of treat.

There’s only really one scene that jumps off the stage and grabs you – and that’s the only scene that’s visually, if not verbally faithful to the book – the obsessive munching of the eponymous treat.