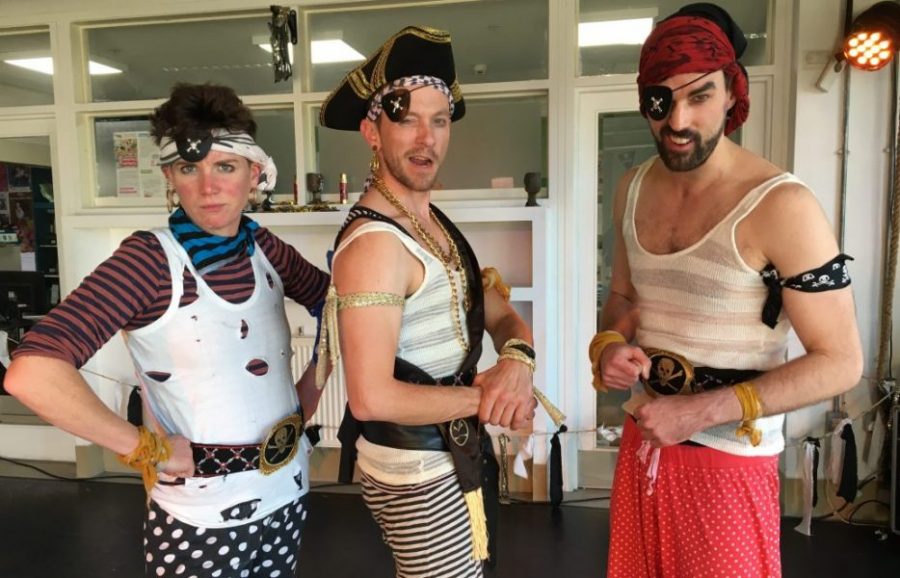 The clue is in the title – a school for pirates – specifically, mini-pirates, aged 3-9.

One element of children’s theatre that adults often miss out on is the interactivity, and while performances at North London’s Arts Depot often include a little audience participation – whether it’s singing along, shouting at the performers or getting sprayed with water – Pirate School takes the idea to a new dimension.

With the adults seated along the back of the performance space, the children are part of the show.

Three pirates – Captain Mad Dog McGinty, the ship’s first mate Mighty Bill and the cabin boy Slim Jim – welcome the audience with the quandary that the rest of their crew members have fled so they need to find some new pirates to join them.

Fitting the youngsters up with eye patches, bandanas and gold chains, the team invite the children to take part in a series of games to learn how to be a pirate on The Soggy Otter.

For the ensuing 45 minutes, parents can watch their kids running around having fun, shouting pirate catch-phrases, waving imaginary cutlasses, trying to frighten each other with the loudest “a-har,” learning to cope with big waves, fight rival pirates – and the all-important manning of the poop-deck.

The 3-9 age range suggested might be a little ambitious, with 8 and 9 year olds potentially feeling it’s a bit beneath them, but younger kids will love the opportunity to dress up, work off some energy and make rude noises with impunity.

Perhaps more suited to a half-term activity group than a stage show, the main advantage for parents is just to watch your kids having fun – which is something you’d miss out on at a drop-off group.

A show that’s this immersive inevitably involves the kids piping up with many of their own comments and suggestions and it’s a sign of the sharpness of the performers that they were never thrown, working many of the children’s ideas – and heckles – into the show.

But this did make it feel – at times – a little anarchic, lacking in direction and without much of the promised storytelling element of the show.

Many familiar areas of pirating – from the skull and cross-bones to digging for treasure, Polly the Parrot, walking the plank and the singing of sea shanties – were largely overlooked, but perhaps it’s simply the case that the more involved the kids become, the less time there is for the performers to work down the list.

As it is, the interactivity will make every performance different and the 45 minutes breezed by so if you’re looking for a half-term activity that will use up their energy while sparking their imagination, Pirate School is a highly entertaining experience and the catch-phrases will haunt you until they return to school.

A little bonus might have been that having spent the best part of an hour teaching the kids to be pirates, they could have presented them with a certificate at the end to take into regular school for show-and-tell.