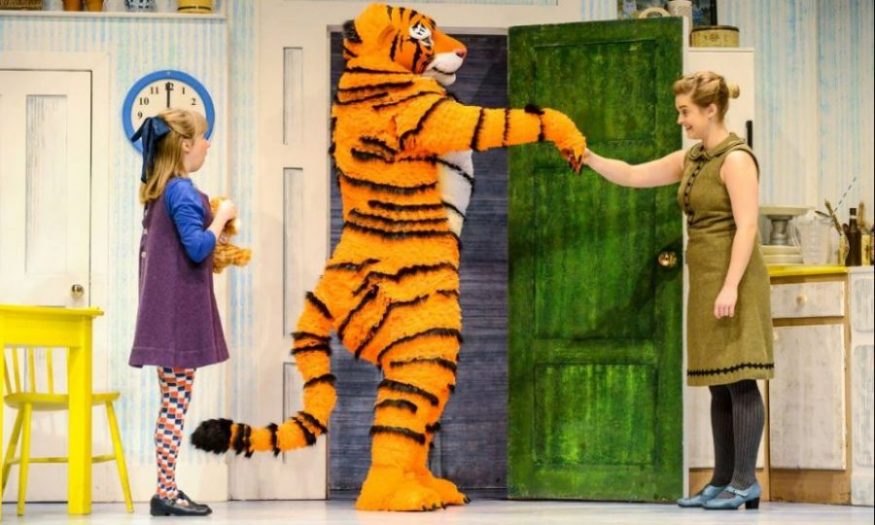 Sophie (Abbey Norman) and her Mummy (Ashley Tucker) are sitting down for tea, one afternoon, when there’s a ring at the doorbell.

Who could it be?

They open the door and in walks a Tiger.  A very hungry Tiger. A very thirsty Tiger.

By the time Daddy (Harry Howles) gets home for dinner, the Tiger has eaten and drunk all the food and drink in the house.

Director David Wood has adapted Judith Kerr’s classic children’s book of the same name in the traditional way – adding a few songs and a little bit of extra story here and there.

The songs are simple and won’t stick with you after the show, but they’re catchy enough so that the children in the audience can join in when they come round again. And the singing, particularly from the women, is of a standard high enough for an adult West End musical.

There aren’t a lot of opportunities for audience participation but there’s enough interaction to ensure that children aren’t vacantly staring at the stage. But one particular song that requires full audience involvement didn’t quite strike the right note.

The build-up to the arrival of the Tiger ratchets up the anticipation in the audience, each time the doorbell rings and when he finally arrives, his boundless energy – and appetite – are infectious. Most of the best scenes involve the Tiger’s memorable miming and cuddly choreography, but the show does seem to lose its impetus once the eagerly-awaited eponymous character has left.

The story is somewhat slight and even for a children’s production, there’s no drama – a tiger comes for tea, eats them out of house and home, Daddy comes back, there’s nothing for dinner so they go to a cafe. Even the fact that the Tiger finishes off all their food and drink doesn’t seem to change their view that the visit was welcome and he was friendly and fun.

As children’s musical theatre goes, the Tiger Who Came To Tea is a thoroughly entertaining spectacle, with some well designed stage tricks, and genuine warmth from the stage, but there’s little from a narrative point of view – in the original source material or its theatrical embellishments – to engage Mum and Dad.