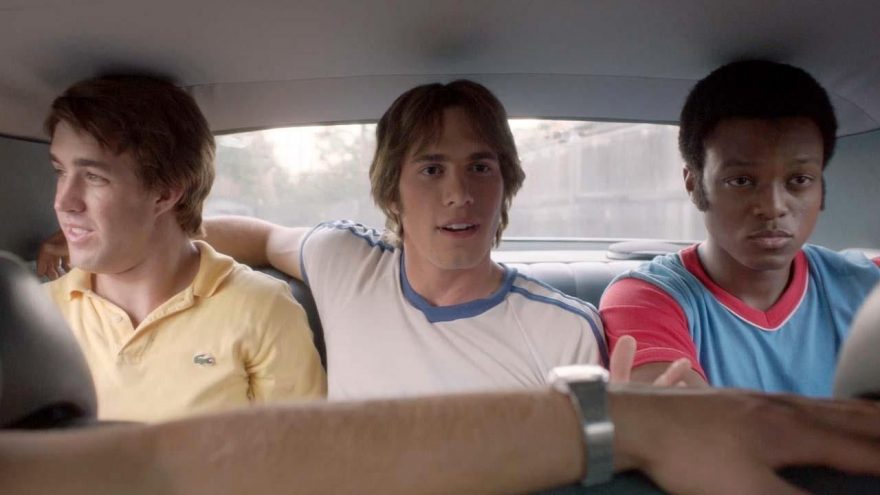 In the summer of 1980, Jake (Blake Jenner) arrives at university, three days before the start of the rest of his life.

He’s on a baseball scholarship and is assigned to one of two neighbouring houses used by the university team, which includes freshmen like him, as well as more senior students who know the ropes rather better.

Some of the newcomers fall in with the older students, while some find themselves the subject of hazing or worse, bullying.

On his first day, Jake goes for a drive around town with his new housemates and from the moment he first spots Beverly (Zoey Deutch) unloading her car, he’s entranced.

Everybody Wants Some!! (yes – there are not one, but two exclamations marks in the title!!) chronicles the last three days of Jake’s childhood, as he prepares to start university and play college baseball.

As the follow-up to Boyhood, Richard Linklater’s examination of university life – after previously studying high school in Dazed and Confused – comes with high expectations.

He certainly knows how to produce confident and convincing performances from a large ensemble cast of actors largely unknown to anyone unfamiliar with the latest American TV shows.

It tackles all the themes you’d expect, from fraternity and first love to hazing and a bit of light bullying – and light is probably a fair word to describe most of what’s on screen; there’s light comedy – light drama – a light plot – it’s a light film.

The problem is that coming from Linklater, audiences will expect more than light. Perhaps it’s unfair that an auteur of his calibre has higher expectations, although a newcomer to directing would almost certainly not have managed to get such a mindless and shallow ensemble-piece into production, however entertaining it turned out to be.

Set in the early 80s, it’ll resonate particularly with people in their late 40s and early 50s but it won’t tell them anything about life they didn’t already know – or haven’t already seen in any number of American movies.

With 16 members of this baseball team, many of whom are buried under period moustaches and hairdos, it’s often hard to tell them apart and by the end, you realise that you’ve largely been following only a handful of the players.

It was certainly enjoyable, with a few unexpectedly big laughs, but ultimately it was rather inconsequential and adds precisely nothing to the sum of human knowledge.

Punctuating film titles always seems a little desperate – “Please like us – we’re really quite cool,” it shouts – so two exclamation marks feels like a bit of a cry for help.

Everybody Wants Some!! is the most successful and entertaining lazy and unambitious film for years – and there won’t be that many people who’d want that!!