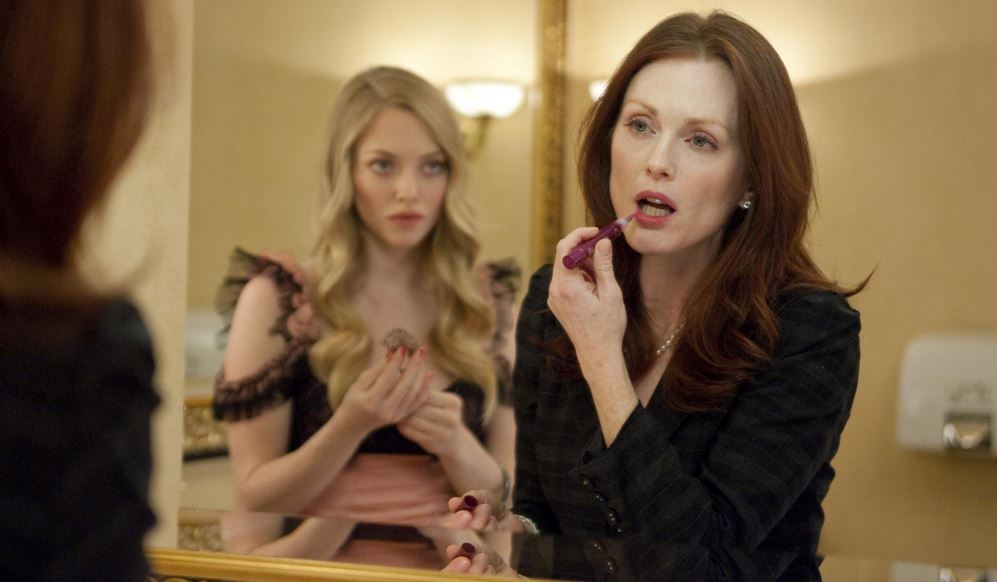 To the outside world, their life seems idyllic, but beneath the surface, things are not going smoothly.

When David fails to make it home from New York in time to attend his own (admittedly surprise) birthday party, Catherine becomes suspicious. Is he being unfaithful? Could he be unfaithful?

Catherine finds a high-class hooker – the eponymous Chloe (Amanda Seyfried) – and pays her to try to seduce David – asking her to report back on her progress at regular intervals.

As Catherine starts hearing increasingly detailed accounts of the meetings between her husband and Chloe, living a new sex life vicariously, she develops some unexpected feelings of her own.

Following up on them can have only tragic consequences.

Canada’s Atom Egoyan has a reputation for making thoughtful films. Sometimes they hit – although never particularly commercially – other times, like his most recent Adoration – they miss.

Chloe is likely to have more popular appeal than much of his previous work and with strong and empathetic performances from both Julianne Moore and Amanda Seyfried giving rise to a fascinatingly unexpected dynamic between the two women, this could well be one of his stronger performers at the box office.

This film – loosely based on the French film Nathalie – explores how jealousy and a lack of trust can set in train a surprising chain of events which develop a life of their own.

As allegiances and expectations sway, no-one really knows who they can trust, as the mind games between the two women get out of control, while stuck in the middle, Liam Neeson appears to be oblivious to all that’s going on around him.

But there are moments when the film stretches reality a little too far and although the performances are convincing, it’s sometimes hard to accept some of the decisions the characters make.