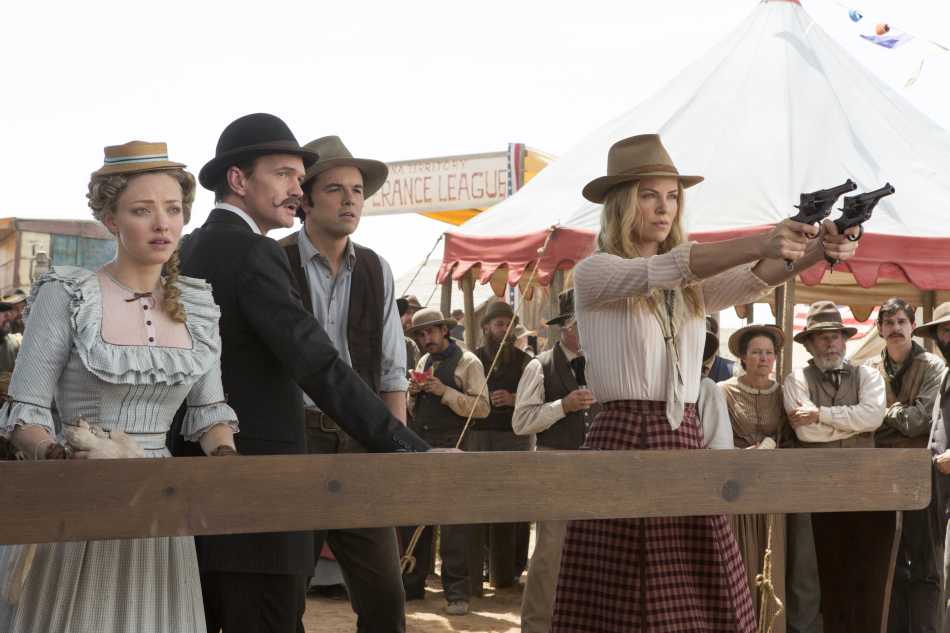 In a small frontier town of the Wild West in 1882, wise-cracking sheep farmer Albert (Seth MacFarlane) talks his way out of a gunfight only to lose his girlfriend Louise (Amanda Seyfried) for being a coward.

While he’s drowning his sorrows in the saloon, with his best friend Edward (Giovanni Ribisi) and the local hooker Ruth (Sarah Silverman), a bar brawl breaks out and in a rare moment of courage, he manages protect a newcomer to town, the beautiful Anna (Charlize Theron).

Hearing his story, Anna takes pity on Albert and teaches him to shoot, so that next time he finds himself in a gunfight, he can stand up for himself.

The pair become friends – too close friends, it seems, when Albert discovers that Anna is married to the local outlaw Clinch (Liam Neeson).

Can Anna toughen him up enough to face Clinch when he breezes into town? Will the newly more confident sheep farmer be able to woo his ex back from her supercilious new beau? And will the new Albert even want her back?

The man behind Family Guy and American Dad first turned his attention to feature films with the remarkably cheeky Ted, in which he provided the voice for the eponymous cuddly toy, as he does for the main characters in his animated TV sit-coms.

For his second outing, emboldened, perhaps, by the higher profile his Oscar hosting gave him last year, Seth MacFarlane takes the unusual step of putting himself in front of the camera, but without the security of cartoons or cuddly toys to hide behind, or the comedy voices that go with them, the real-life Seth, with his real-life voice is charming enough but lacks the dangerous edge of his previous incarnations. And to be fair, physical acting doesn’t appear to be his strong point.

The film is bursting with effective visual gags – much of it puerile and poo-related – some inspired by his cartoons, others lifted directly from his cartoons and more still that wouldn’t be at all out of place in one of his cartoons. And it’s full of the kind of cultural references familiar to anyone who knows his work. There are also a handful of entertaining and unexpected cameos.

But the story itself is frustratingly pedestrian and predictable. Too many of the gags are literally toilet humour, he’s so proud of one particular joke – at the expense of co-star Amanda Seyfried – that he uses it twice, and with too many of the characters being Wild West archetypes, it all feels rather lazy.

There’s a lot of laughter to be had, but rather than having the edge you’d expect from Seth MacFarlane, apart from a couple of dangerous moments where you can feel the nervous audience wince, the overall experience from this rare MacFarlane misfire is one of disappointment as he delivers little more than a formulaic genre love story.