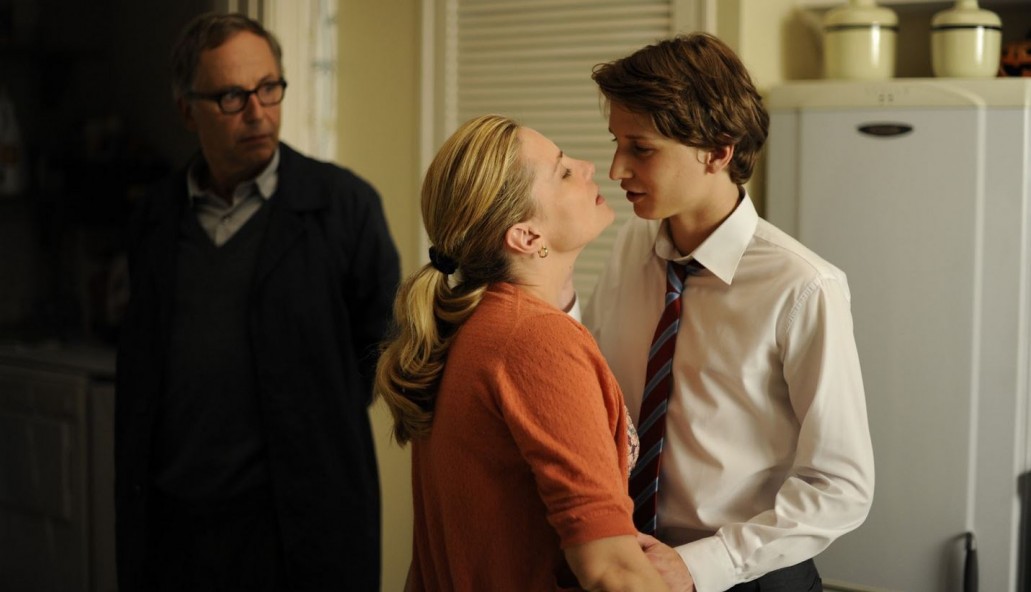 Germain (Fabrice Luchini) is a French teacher – a thoroughly bored and depressed French teacher – his mood not being helped by the kind of responses he gets from his sixteen year old pupils when he asks them for an essay about what they did at the weekend.”Watched TV,” is about the best he can hope for.

But in among the rough, he finds a diamond; loner Claude (Ernst Umhauer) describes how he spent time at the home of his middle-class classmate Rapha (Bastien Ughetto), ostensibly to tutor him in maths, but really to get close to Rapha’s mother Esther (Emmanuelle Seigner). The more Germain reads, the more he feels drawn in to Claude’s view of Rapha’s family life. He sits forward enthusiastically as he turns the page and looks bereft when he gets to the bottom and sees: “To be continued…”

Each week, Germain looks forward to the next installment, the next window into Claude’s world. He can’t contain his excitement and even gets his gallery-curator wife Jeanne (Kristin Scott Thomas) involved, as they debate the rights and wrongs of encouraging Claude to persist, as he works his way deeper into Rapha’s family.

Germain – himself a frustrated author – offers Claude private coaching sessions to feed his newly discovered voyeuristic tendencies, torn between remaining an observer of the intriguing relationships that are unfolding and being complicit in interfering in and jeopardising Rapha’s happy family life for dramatic effect.

Based on a Spanish play, In The House is a gloriously verbose evisceration of social mores, class barriers and intellectual snobbery.

After his somewhat lightweight Potiche, François Ozon is back in the more mature and darker territory of some of his earlier work, such as Under the Sand, Swimming Pool and 5×2.

His screenplay bristles with barbed wit and draws in the viewer every bit as much as Germain is drawn in by reading Claude’s prose.

As the film begins to blur the lines between reality, Claude’s creation and Germain’s vivid imagination, Ozon ratchets up the tension in an almost Hitchcockian way, as the potential consequences for Rapha’s family loom large. With the two central characters egging each other on, with their own motivations, they selfishly manipulate their unwitting subjects, providing a fascinating insight into storytelling, from every point of view from the inspiration, through the creator to the sponge that soaks up every last drop.

The second release of the week to centre on the concept of the unreliable narrator, In The House is more compelling, coherent and even shocking than Trance, as it takes you to places you’d never think you’d go – or even want to.

The contrasting performances of veterans Fabrice Luchini and Kristin Scott Thomas and newcomer Ernst Umhauer add further spark to an already light and bright thriller, with a darkly comic undertone.

In The House is one of those thoroughly literate cinematic confections that delights audiences and reaffirms confidence in a French cinema that can sometimes be accused of being a little self-important. This film certainly is self-important, but deservedly so, collecting a slew of French César nominations, in a year that was dominated by Amour.

With so much of the plot unfolding in the imaginations of its protagonists – and it’s not always entirely clear whose – the narrative has a complexity that can be as frustrating as it is rewarding, and having taking this intellectual adventure into thriller territory, Ozon might have delivered a slightly darker, more satisfying denouement.