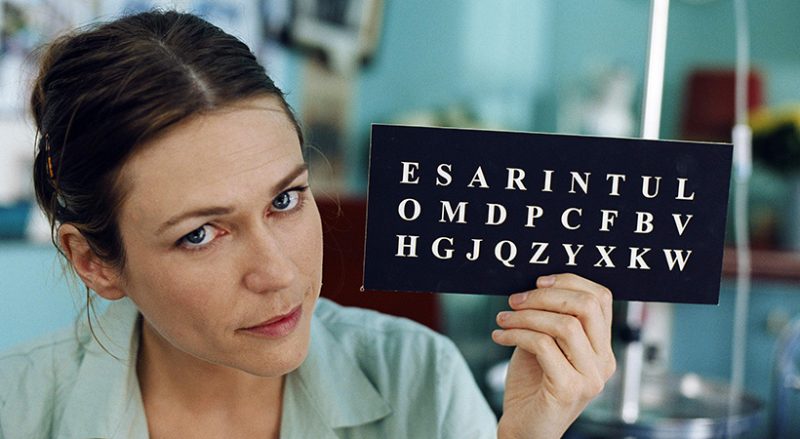 In 1995, the editor of French Elle magazine, Jean Dominique Bauby (Mathieu Amalric) suffered a stroke so severe that it left his entire body paralysed, except for his left eyelid. Locked-in Syndrome is what his doctors called it – a wonderful, creative mind, trapped inside a useless shell.

It took the former playboy some time to come to terms with his new life of dribbling, helplessness and total dependence on others, but after being taught to communicate by winking his left eye as letters were called out by carers and friends, the butterfly takes it upon himself to write his memoirs, dictated a letter at a time, from inside his diving bell.

How anyone had the audacity to make a feature film about a main character who can’t speak and can move only his left eyelid is a wonder. That Julian Schnabel succeeds in giving us a film that is as moving as it is beautiful is an achievement indeed.

Shooting much of the film from Bauby’s point of view, Schnabel has justly been honoured with prizes – in Cannes – and nominations – at the BAFTAs and upcoming Oscars.

Mathieu Amalric gives a tremendously brave performance, using nothing but his eyelid, but even that flap of skin seems to be perfectly able to express his gratitude that almost without exception, from his ex-wife to his physiotherapist and speech therapist, all the women in his life are astonishingly beautiful.

Even after his stroke, if you believe the author’s telling of his own story, the former editor of Elle was still able to surround himself with some of the most beautiful women France has to offer.

The film’s only failures come from the nature of the material…how exciting, moving, thrilling can you make a film about a man whose life consists of sitting in a chair and thinking. It’s a remarkable piece of artistic film-making, but not particularly satisfying emotionally.