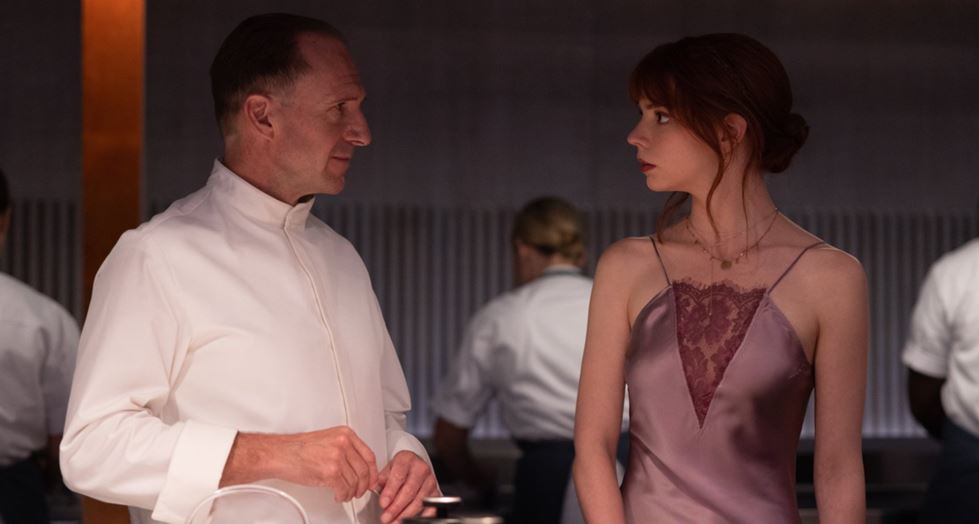 Tyler (Nicholas Hoult) is a foodie extraordinaire – his knowledge about the finest cuisine and his passion for the experience of enjoying such food know no bounds.

Food is so important to him that he’s prepared to pay more than a thousand dollars a ticket for him and his date, Margot (Anya Taylor-Joy), to enjoy dinner at the exclusive Hawthorn restaurant – so exclusive that you need to get a boat to the island where it’s the only establishment – run by the enigmatic Chef Slowik (Ralph Fiennes) – a chef so well regarded that people are dying to work with.

Other guests tonight include a restaurant critic (Janet McTeer), who’s been a bit dismissive of Chef Slowik in the past, employees of the restaurant’s owner, a fading TV celebrity (John Leguizamo), whose most famous show was not to Chef’s taste – and the mother who brutalised him as a child.

As they progress through the menu, course by course, the dinner guests realise that this dining experience is not going to have a sweet ending.

Sending the obscenely rich on a fine dining experience – and giving them what they truly deserve – is becoming oddly fashionable, just a month after the Cannes Palme d’Or-winning Triangle of Sadness gave its billionaires a severe case of sea-sickness during dinner with the captain on their luxury yacht.

This time, it’s a tale of revenge as Ralph Fiennes’ Chef Slowik, rounds up those he’s come to despise and traps them in his dining room, to see that – in his view – justice is done.

Of course there’s something nihilistic about this – but while these people certainly have questions to answer, the fate that awaits them seems no more justified than whatever they might have done to upset Chef Slowik.

Furthermore, many of Slowik’s victims seem, inexplicably, content to march towards their own end, as if he’s not a chef, but the leader of some kind of a doomsday cult.

The immorality of this film leaves – no pun intended – a sour taste in the mouth.

Up to a point, it’s an interesting and effectively creepy psychological thriller, satirising the world of fine dining as it makes the guests start to question their past behaviour and the impact it has had on others. The unplanned presence of one particular character raises an interesting quandary.

But a point comes – that might recall a moment in The Banshees Of Inisherin – where the film starts to take an altogether darker tone, becoming a full-on by-the-book horror.

In some such films, audiences might identify with the motives of the killer – or the plight of the guests – but in The Menu, there aren’t really any characters for the audience to side with. And for horror fans, it doesn’t quite have the courage of its convictions – if a chef is creating increasingly outrageous dishes to unsettle his guests and the narrative starts heading down a nihilistic one-way street, you’d think the main course would- be rather more disturbing than it is. And once it sets off down this tunnel, apart from one peculiar cul-de-sac, there’s little sense that anyone other than Slowik has any control over their destiny, which makes for a disappointingly linear narrative.

It’s slick and initially promising but degenerates into a shallow fright-fest that displays little logic and inexplicably fails to push the very boundaries it sets itself.