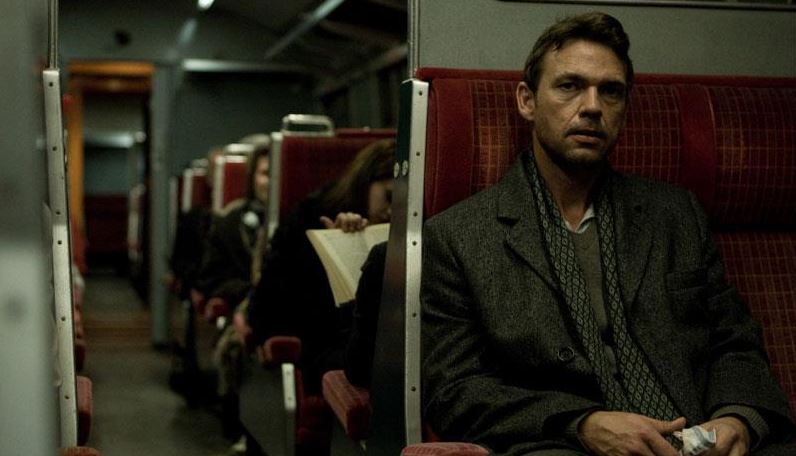 Hospital doctor Lewis (Dougray Scott) is on the last train, taking his young son Max (Joshua Kaynama) home from London. He’s under pressure from the hospital to get in early for his night shift.

The train is largely empty, but Lewis and Max find themselves sitting close to a young woman Sarah (Kara Tointon), who’s wimped out of a girls’ night out.

Pleasantries and banal conversation between Lewis and Sarah soon become flirting. The pair become so relaxed with each other that he trusts her to keep an eye on Max while he has a little doze before work.

But during an unscheduled stop, Lewis thinks he sees a figure clambering along the tracks on all fours. Then the train fails to stop at one station. Then another. As the train gathers pace, the remaining handful of passengers realise that someone is in the cab, driving the train faster and faster towards the end of the line, with no intention of stopping.

Lewis takes it upon himself to try to stop the train, with some of the passengers agreeing to help, while others have guarded motives for waiting for help to arrive.

But when Lewis discovers that the emergency brake has been disconnected and he can’t break into the driver’s cab, more dramatic action is required.

Last Passenger is a tremendously ambitious and largely successful low budget British thriller. Funded after the film-makers took a mocked-up trailer to Cannes in 2011, it does feel cheap – with a single location (a train that looks like it would have been more at home in eastern Europe in the 1950s), claustrophobic night-interior shots (the camera leaves the train about three times in the whole film), little more than distant blurred lights through the windows – but this did, at least, serve to concentrate the mind on the plot.

The story wasn’t entirely convincing and took rather too long to get going – it feels pedestrian at the start, with too much time spent building up the relationship between Lewis and Sarah, rather than getting what was to become a nail-biting ride off to a quicker start. Surely this is a thriller, not a romance.

The passengers left on the unstoppable train felt like they were taken out of the casting-by-numbers text-book; the tired doctor taking his cute son home before a night shift at the hospital, the perfect single woman on the next seat, an innocent grandma (Lindsay Duncan), a suspicious eastern European (Iddo Goldberg) and an obstructive, cantankerous old man (David Schofield).

Much of the acting felt as small-scale as the overall canvas, with many of the appearances feeling that they’d be more suited to TV.

There’s not much action for an action film and what action there is doesn’t always ring true; at times, the plot is as runaway as the train, as logic and coherence are left behind.

The script is somewhat textbook, but at times commendably tight, with a handful of oddities cleverly and acceptably explained with believable exposition.

But the contrived nature of the plot and supporting characters, along with the constraints of the budget, add a sense of reality that wouldn’t be afforded a  Hollywood equivalent.

It’s gritty, exciting and you’re never quite sure where it’s going to go – although much of the time, when you find out, you think they should’ve come up with that idea much earlier.

But it’s a good example of what can be achieved with a little money and a lot of ambition and it certainly raises the expectations for what director Omid Nooshin might achieve with enough money to do what he likes. He’s a director to watch, more than a writer to watch.