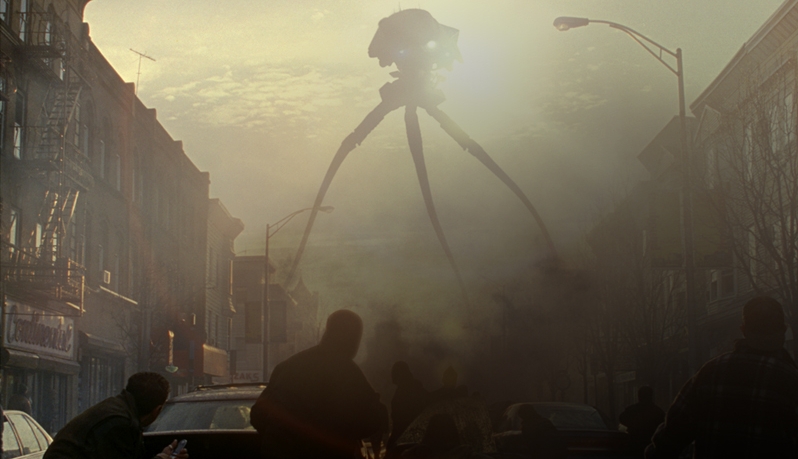 Dockyard worker Ray (Tom Cruise) is looking after his son Robbie (Justin Chatwin) and daughter Rachel (Dakota Fanning) for the weekend, while his ex-wife heads to Boston to visit her parents.

Robbie’s a bit of a rebel and disappears in Ray’s car, just as a storm breaks. But this is no ordinary storm. The wind is blowing towards the storm, observes Ray.

After enjoying the lightening display, Ray heads out in search of his car and finds people gathering around a hole in the street where lightening struck several times in exactly the same place. The earth shakes. The tarmac cracks. Everyone runs for cover as a huge three-legged alien craft emerges from the ground, all guns blazing, destroying everything in its path.

As the Martians spread across the city – and the world – Ray sets out to reunited his children with their mother in what he naively hopes might be the safety of Boston.

There’s no doubt that Steven Spielberg knows how to make a movie. Give him a few million dollars and the biggest film star on the planet and of course he’s going to come up with an effective piece of entertainment. Visually, as you’d expect, it’s stunning.

But – and he might well put his hands up and say “not my fault, guv” – where is the story? In that sense, this film is like the climate-change thriller, The Day After Tomorrow – visually stunning, but no story worth speaking of. In that film, as in this, it’s not a film about a group of characters saying “What’s happening and what can we do to restore normality and save the world?” It’s just a film about survival. There’s no way humans can hold their own against these ruthless aliens, so the only question is “How long can they last and how can they do it? Can they make it to the end of the film?”

While, for some people, that might be enough, it doesn’t make for very satisfying storytelling. In most films of this kind, we follow scientists, government officials or nerds who know – or at least think they know – a bit about what’s going on. By following a dock worker, we have a lead character who doesn’t really know anything about anything, so it becomes little more than a film about a father who has to overcome obstacles thrown at him when he’s trying to look after his children for the weekend – it just happens that in this case, the obstacle is an alien invasion.

It’s also a bit corny that Ray manages to find the only working car in North America, our heroes happen to stop for a toilet break at exactly the right moment for the result of a nearby tragedy to have maximum dramatic impact and of all the thousands of people running for their lives, our heroes just happen to be the only ones invited to share an underground bunker with a woefully underused and rather pointless Tim Robbins.

Of course, suspension of disbelief is crucial for the enjoyment of such movies, but this should be taken only so far. We have to accept that there’s an alien invasion going on, but we shouldn’t have to accept the illogical coincidences that run alongside.

By giving mankind no way to fight back – as Robbins remarks, “This isn’t a war, it’s an extermination” – the film exposes the very worst of humanity, without balancing it with schmaltz for which Spielberg has become known.

The biggest crime, from a storytelling point of view, is that there’s so little explanation that without a ten second voiceover, after the film has finished, we wouldn’t have a clue what had actually happened to bring a weekend of drama – and two hours of our lives – to an end.

We know Spielberg and Cruise can deliver entertainment – of that there’s no doubt. But after their previous collaboration, Minority Report, delivered a science fiction that was every bit as intelligent as it was entertaining, this is a cerebral disappointment.

It’s not a bad film. On the contrary, it’s highly entertaining – not least because of some smart humour coming out of the relationship between the children and their absent father. But ultimately, it’s just nothing like as satisfying as one would expect from two of Hollywood’s greatest contemporary practitioners.