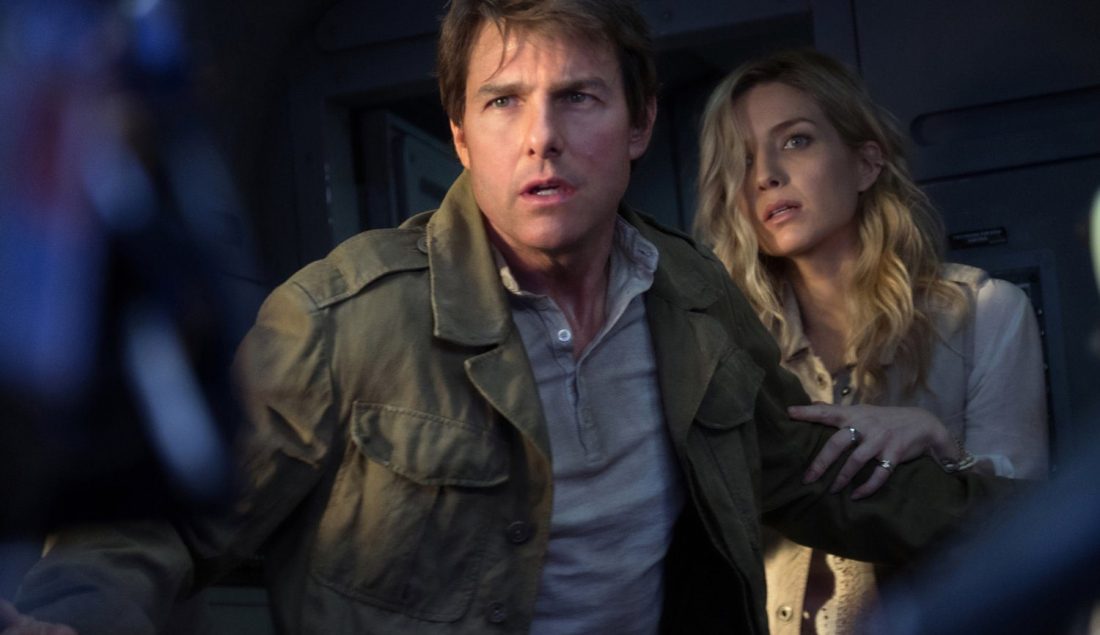 Nick Morton (Tom Cruise) is a US soldier who loots priceless artifacts on the side, with the help of his sidekick Chris Vail (Jake Johnson).

While in Iraq, they uncover the crypt of a malevolent ancient princess, Ahmanet (Sofia Boutella), under the desert and team up with archaeologist Jenny Halsey (Annabelle Wallis) to bring her to Britain.

When Ahmanet suddenly awakens, Nick finds himself being pursued by evil incarnate.

Universal launches its “Dark Universe” of classic monsters with this Tom Cruise-led adaptation – and oh mummy what a derivative mess.

The look and tone is all over the place as it can’t decide whether to be more like the 1932 version of The Mummy starring Boris Karloff or the 1999 Brendan Fraser remake.

With its spectacular stunts (the one inside a plane in which Cruise and Wallis undergo zero-g is impressive and took 64 takes) and Cruise in action and running man mode it seems more reminiscent of a typical Tom Cruise movie than a mummy horror flick. As a colleague quibbed, it would be more entertaining watching Karloff in a Mission Impossible feature than this.

The other problem lies in that this appears to be comprised of a series of stunning action sequences, linked loosely together by a thin plot (despite the six writing credits) and it lacks heart and soul as well as chills and thrills.

There are plenty of spiders, crows, rats and zombies, but it seems to take itself way too seriously and certainly lacks the entertaining spark and humour of its predecessors.

Also Nick is supposed to be a wise-cracking lovable rogue but in fact he is more of an obnoxious dick so you don’t really warm to him. Plus Cruise has zero chemistry with his co-star Wallis. However Boutella is truly majestic as the deliciously evil and frightening mummy and is in danger of stealing the film.

Johnson provides the light relief by popping up and haunting Nick at inappropriate moments similar to An American Werewolf in London except it isn’t terribly funny.

It also stars Russell Crowe as Dr Henry Jekyll who is the head of a secret organisation aimed at exterminating all evil and thus the mummy. However Crowe makes one of the most unconvincing incarnations of Mr Hyde with his soot like covered face and cod cockney accent.

Crowe’s Dr Jekyll will also reportedly feature in his own spin-off film in the new Dark Universe franchise along with Javier Bardem as Frankenstein’s Monster and Johnny Depp as The Invisible Man (that will be worth seeing).

It is a genius idea for a franchise but I fear director Alex Kurtzman’s The Mummy with its uninspiring and disjointed plot may have put paid to the Dark Universe before it even gets off the ground.

Personally I would just re-watch the Brendan Fraser and Rachel Weisz Mummy films. They may be cheesy but they are wonderfully entertaining.