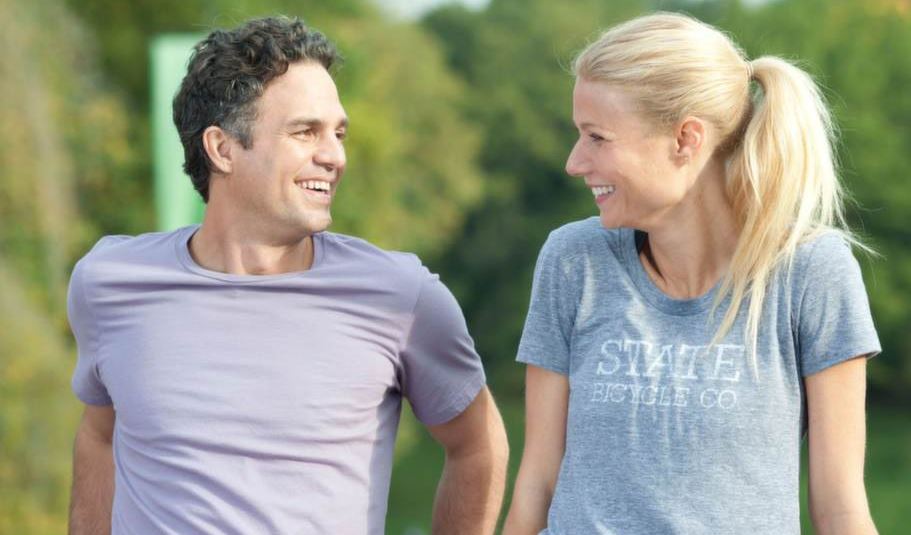 Adam (Mark Ruffalo) has it all – good looks, money, an amazing apartment – but he has a problem – an addiction; he attends a weekly meeting where a group – of mostly men – discuss their addiction to sex.

He’s clocked up long enough without a relapse to be given a newcomer to sponsor – Neil (Josh Gad) has been sent to the group after rubbing himself up against women on the subway.

The leader of the group, Mike (Tim Robbins), is the father figure they all turn to for inspiration, but although he’s outwardly a confident leader, he’s having trouble at home.

Adam feels that he’s ready to date again, but the woman he meets, Phoebe (Gwyneth Paltrow), reveals too late that she won’t touch a man with an addiction.

Neil forms a friendship with the only woman in the group (played by the singer Pink), who seems to have the best chance of keeping him on the right track.

Thanks for Sharing follows the disparate group of addicts as they try to improve their public and private lives.

I’m Jason and I’m a critic. I’ve been reviewing films since the late 1990s and I just can’t stop. “Thanks for Sharing,” you might say. But you won’t thank me for sharing this film.

Stuart Blumberg’s tragic-comic drama explores territory that has been tackled in a more provocative yet believable way in films such as Choke.

Rather than centring on a single character, the film attempts to build an ensemble cast around three addicts – recovering, recovered or otherwise – but while Mark Ruffalo’s Adam is sympathetic, it’s difficult to care for Josh Gad’s Neil, who comes across as a creepy loser, or Tim Robbins’s Mike, whose public and private personae differ in all respects except that they’re both control freaks.

Their performances are fine, but it difficult to engage or care about Neil or Mike – not least because Neil doesn’t seem to be interested in getting better, while Mike appears to be better already, so the writers have to fabricate problems for him at home, completely unrelated to the addiction at the heart of the film.

The main problem with who, in truth, is the main character – Adam – is the woman he falls for; Gwyneth Paltrow’s health-freak addictophobe is selfish, provocative, incoherent and generally unlikeable. It’s clear that the film wants us to be rooting for the couple to hit it off, but it’s not long before we’re shouting for him to move on. Although she’s not an addict, she seems to be more addicted to sex than anyone else in the film – and she certainly provokes Adam into a relapse. Her behaviour would be comparable to someone who suggests that an alcoholic should celebrate five years dry with a bottle of bubbly.

Adam’s story feels the most real, while Neil’s often appears to come from a different film altogether. Realistic or not, it’s uncomfortable to note that some of the group members are genuinely struggling with a self-destructive trait that’s holding them back while others are criminals, sent there as penance for low-level assaults. It’s also frustrating in such films for the plot to be set within a large group of addicts – only four of whom ever get to speak.

Thanks for Sharing has its moments, but it’s uneven and unrewarding and has little to say about the difficulties of dealing with an addiction that’s as taboo as this.