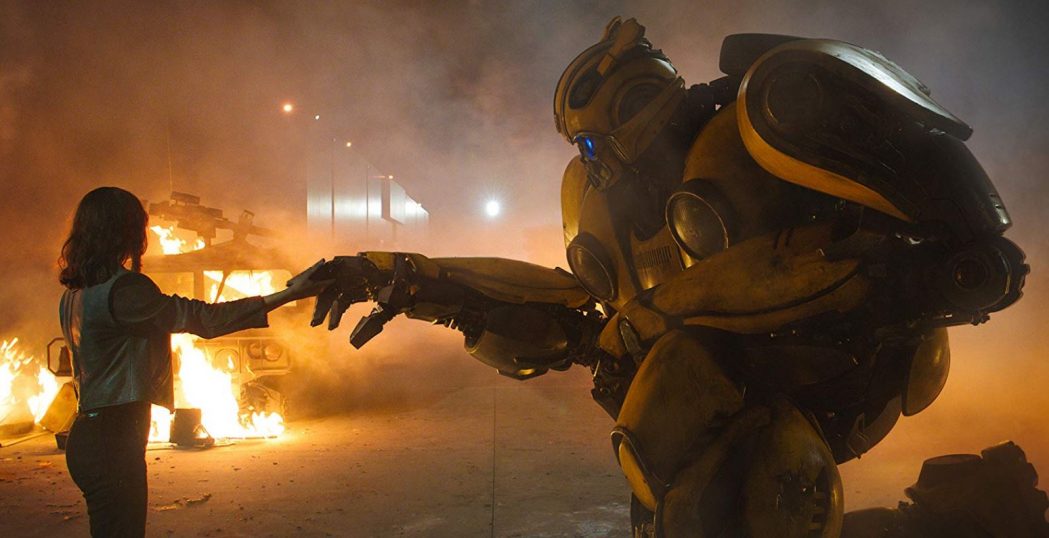 This is a prequel to the Transformers movies, set twenty years before the start of the franchise, in which you learn about Bumblebee’s origin story and how he came to Earth.

On the run from the Decepticons, he finds refuge, in 1987, in a junk-yard in a small Californian beach town where he lays low as an old yellow Volkswagen Beetle car.

Charlie (Hailee Steinfeld), on the verge of turning eighteen, discovers Bumblebee and takes him home as a birthday present to herself and learns there is more to him than meets the eye.

This is the first and only film in the Transformers franchise that is worth seeing – something I never thought I would ever say.

It’s is wonderfully entertaining, makes perfect sense and you can tell the robots apart in the fight scenes, unlike in the previous five films.

The reason for this miracle is that Michael Bay didn’t direct this prequel and the screenplay has been penned, in another first, by a female screenwriter, Christina Hodson.

Hodson and director Travis Knight breath new life into this tired-out dinosaur of a franchise. This is clearly a family-centred film with an emotional core and no more sexist or sexual double-entendres and innuendos, unlike in Bay’s Transformer movies.

Plus Steinfeld, who wasn’t even a glimmer in her parents eyes in 1987, brings a lot of warmth and heart to Charlie’s blossoming friendship with Bumblebee. The two have wonderful on-screen chemistry together, which sounds ridiculous, not lease because Bumblebee is computer generated. Yet Steinfeld is such a talented and cracking actor that she makes their relationship appear tangible and real, even though she was acting to a tennis ball on a stick.

However, in a TV interview, she hilariously admitted she had to be shown how to work eighties gadgets, in particular the Sony Walkman.

John Cena makes a fun and formidable foe as the mysterious Agent Burns, who is hell-bent on capturing Bumblebee.

There is also the beginnings of a teenage romance between Charlie and her school friend Memo (Jorge Lendenborg Jr), in a sweet and innocent ongoing will-they-or-won’t-they go out on a date.

It’s a surprisingly fun and heartfelt Transformers movie, which will appeal to hardcore and non-fans alike.